On 10 May the University Grants Committee (UGC) made an announcement concerning the Academic Development Proposals (ADPs) submitted by the eight UGC-funded institutions for the 2005-08 triennium. CityU’s proposal to make creative media a growth / priority area was endorsed. Out of the 840 second year intake top-up places that UGC allocated to the eight institutions, CityU received 210 places, the second largest number. The UGC has also endorsed CityU’s proposal to start two new undergraduate programmes: one on Criminology, and another on the Teaching of English. The latter will be a joint programme with the Hong Kong Institute of Education. CityU Vice President (Undergraduate Education) Professor Edmond Ko, talked to the CityU NewsCentre about academic planning.

What is a growth / priority area as mentioned in the UGC announcement?

Each institution recommends growth / priority areas in its ADP submitted to the UGC. A growth area is by definition an area that will make significant contributions to society, and to which a university will allocate more of its resources. Taking into account the Government’s advice on future development in , and its specific manpower requirements for certain professionals, we recommended that more student places be allocated to the area of creative media. It is widely accepted that our School of Creative Media (SCM) has been nurturing talented graduates who are making unique contributions to .

As recommended by the UGC, the first-year first degree places will remain unchanged for the 2005-08 triennium. What are the implications for the University’s overall academic development and planning?

We asked for an extra 100 first-year first degree places in our ADP. We have also voiced our aspiration to increase the creative media student intake—that has been endorsed. Now that the UGC advises our overall first-year first degree places to remain unchanged, that means we need to adjust the overall student intake among faculties / schools. The redistribution of student places will be done in a way that is consistent with what we originally proposed in our ADP.

What about the extra 210 places the UGC has allocated for our second-year intake? Are you happy about the quota? 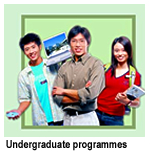 Though the first-year intake remains the same, the second-year intake has increased; so the overall enrolment as a whole has expanded. This is a positive sign. I feel particularly encouraged by the increase in the second year quota; that means we will have greater scope to develop our Associate Degree (AD) articulation programmes. The UGC has already advised how these 210 places are to be allocated among faculties/schools, but we will also work out our adjustment. It should be noted that the 210 top-up places are open to all AD students in and admission will be based on merit.  This is consistent with our enrolment policy in the past few years.

Out  of the total 840 second year places the UGC allocates to all eight funded institutions, our portion, which amounts to one quarter of the whole allocation, is the second biggest. This is an acknowledgement of our experience and achievements in the AD articulation programmes. What is even more encouraging is that the UGC has endorsed our proposal of two new programmes: an AD articulation programme on Criminology, and a joint programme with the Hong Kong Institute of Education on the Teaching of English.

What is the timeframe in implementing the proposed ADP, now that UGC has endorsed it?

Now that UGC has endorsed our direction and has specified our student intake, further major changes on the proposed ADP will not be likely. Professor H K Chang, the President, Professor David Tong, the Deputy President, and I have met the Core Group of the UGC twice, discussing in detail the principles in allocating student places among the various faculties/ schools: such as demand as indicated by student enrolment in the past few years; whether it is a growth area, like logistics and IT, as indicated by the government; whether the allocation is consistent with the new role statement UGC has defined for our University.

After some more adjustment and fine-tuning on the allocation, we will submit student load matrices to the UGC for funding assessment on 5 June this year.

What are the implications on funding for the 2005-08 triennium?

If we look at funding from the perspective of student enrolment, I would say that I am cautiously optimistic about our prospects. Since it is clear now that our undergraduate enrolment will not drop—in fact, it will grow by 420 for the second- and third-year intakes—I think the funding scenario is likely to be quite stable. After all, funding is related to number of student places.