Kenya is a developing East African country known for its national parks. The capital city is Nairobi. "Trade is a tool for development,"Ambassador Mohamed said, describing Kenya's situation. "We are trying to ensure that African countries participate more effectively in the WTO and we want to inject some balance." On the fifth WTO Ministerial Conference held in September 2003 in Cancun, she commented, "Personally, I feel it should not have failed, but too much was put on the table, and perhaps expectations were too high. We go to the conferences to hear instructions from our Ministers, but when we didn't receive any, I was disappointed."

LLM in WTO and Law student Michelle Chui was glad to have the opportunity to meet Ambassador Mohamed, as she was keen to know what is happening in developing countries in Africa and their opinions concerning China. "Why do you suppose Cambodia and Nepal could move faster than other developing countries (such as Ethiopia) to join the WTO?" she asked. "If Kenya had not been a member of GATT (The General Agreement on Tariffs and Trade)," the Ambassador explained, "it would have taken a very, very long time. It's a major investment in itself and Sudan and Algeria are on their way... You spend so much time getting in and then it takes such a long time to reap the benefits that you wonder if it's worth it."

The Ambassador also talked about the three-month WTO training course on offer at the University of Nairobi, for English-speaking African countries. "It's probably one of the best things the WTO has done for developing countries," she said. "Within three months you have a mid-level officer who had no previous understanding of the WTO emerge with enough knowledge to be able to start negotiating for his country. There is also a course in Morocco for French speakers."

Professor Malanczuk took the opportunity to offer assistance to the Ambassador. "If we can be of service in an advisory capacity, we'd be happy to do that. There is already a strengthening of links between China and Africa, and there will be an increase in trade and investment by China in Africa." The Ambassador acknowledged this and was pleased to receive a copy of the timely Special Issue of the J ournal of Chinese and Comparative Law (Volume 6 Number 2, 2003) devoted to "China and the WTO", of which Professor Malanczuk was the Issue Editor. He concluded the discussion, saying, "We look forward to developing opportunities for cooperation and to assist the University of Nairobi-based WTO Training Institute programmes." 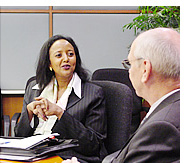 Ambassador Mohamed had met with the Chairman of the International Chamber of Commerce, Mr J P Lee , 23 March, and enjoyed fruitful discussions there, also, concerning trade between China and Africa, negotiations and arbitration. "We're doing a lot to open our markets," she commented. "Kenya is starting to look east. The country is unique, with beaches, mountains, national parks with wild animals and small lakes. It's a good place to go on holiday. Now that Kenya Airways flies direct to and from Hong Kong three times a week, it takes only 10 or 11 hours!"

Ambassador Mohamed is a graduate of Oxford University and was Chairman of the International Organization for Migration in 2003, and Coordinator, in 2002, of the WTO's African Group, of which 41 nations are members.