Reaching out to mainland students 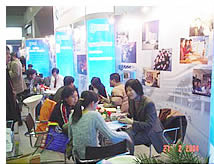 The Admissions Office (ADMO), the Faculty of Business (FB) and the School of Graduate Studies joined hands to participate in the ninth China International Education Exhibition Tour (CIEET), from 21 February to 3 March, in Beijing, Shanghai, and Xiamen. The Tour has successfully fulfilled its mission of broadening the University's student recruitment base and developing long-term networks in the mainland.

The CIEET, organized by the Ministry of Education, is the largest and most influential education fair in China. It was an unprecedented success this year, attracting more than 260 education institutions from 25 countries. "We aim to showcase our strengths and recruit the best students. Viewing the number of participants and audience response, we find the results very satisfactory," said Dr Joseph Kwok , Director of ADMO. The first stop in Beijing (21 and 22 February) hit a record of 80,000 visitors, doubling the audience size last year. CityU's participation attracted media coverage from the China Education Post , Beijing Youth Daily , and China National Radio. The tour is of particular significance for the recruitment of fee-paying mainland undergraduate students. As for the 2004 entry, the Hong Kong SAR Government has raised the intake quota of mainland undergraduates from 4% to 8% of the first-year intake. Geographically, Hong Kong universities can expand their recruitment to 10 selected cities and provinces: Beijing, Shanghai, Chongqing, Shandong, Zhejiang, Guangdong, Fujian, Sichuan, Zhejiang, and Hubei. 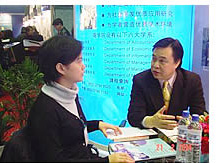 "As society becomes more affluent, more mainlanders plan to study beyond the border for more exposure and connections," said Professor K K Lai , FB Associate Dean (Undergraduate Programmes) and a key organizer of the CityU delegation. "We have our stronghold in cities like Shanghai and we want to extend our reach to even more cities," he added. With 200 participants studying its joint MBA programme with the Shanghai Jiao Tong University, the FB has a growing alumni population in mainland cities such as Shanghai and Shenzhen. The mainland postgraduate student market is booming. The CIEET presents a great opportunity for the School of Graduate Studies to publicize a wide array of its taught postgraduate, MPhil and PhD programmes. The booths were well received with enquiries on entrance requirements, tuition fees, and application procedures.

Last year, because of SARS, the marketing activities in China were held back. This year, ADMO launched a mainland student admissions website and placed advertisements in the China Education Daily . The CIEET gives the Office a chance to have face-to-face communication with mainland students before the National Joint Entrance Examination results are announced in June. Among the three cities, visitors in Shanghai had the most knowledge about the University. Some parents requested enrolment on the spot and many current students in mainland tertiary institutes asked about possibilities of advanced standing. The exhibition in Beijing reached the widest pool of visitors, with people coming from neighboring provinces such as Liaoning. 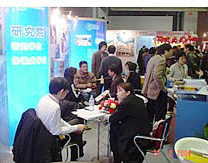 Following on the heels of the CIEET, ADMO will participate in another exhibition in Guangzhou from 27 to 28 March and an education fair in Shanghai in April.