Righting the applecart with the WTO

Who do you call when your country stands accused of unfairly subsidizing its agricultural exports, or sanctioning imports? The World Trade Organization's 148 member nations know. 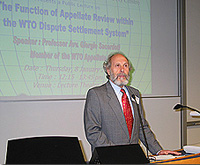 On the invitation of the WTO Law and Dispute Resolution Centre, Professor Avv Giorgio Sacerdoti gave a public lecture on the "Function of Appellate Review within the WTO Dispute Settlement System" on 8 January at CityU. Professor of International Law and European Law at , , since 1986, Professor Sacerdoti became a Member of the World Trade Organization (WTO) Appellate Body in September 2001 for a term of four years. The dispute settlement system enforced by the Appellate Body (AB) is a major feature of the WTO.

After welcoming words by SLW Professor (Chair) Peter Malanczuk, Professor Sacerdoti opened his lecture with the common question of whether or not the WTO, located in , could be considered a court. While the WTO offers a business-like approach to prevent and cure international, "multilateral", trade conflicts with a combination of judicial, economic, diplomatic and conciliatory features, the WTO's Dispute Settlement Body (DSB) made up of ambassadors or equivalent representatives of all member governments, holds the ultimate responsibility for resolving disputes. The current chairperson of the DSB is H. E. Mr Shotaro Oshima, who visited CityU in October 2003. The role of the permanent, seven-member AB (empanelled by the DSB), is to hand down reports on appeals of first rulings/recommendatio

ns endorsed (or rejected) by the DSB. AB members are "individuals with recognized standing in the field of law and international trade, not affiliated with any government."

The WTO is the successor of the General Agreement on Tariffs and Trade (GATT), established after WWII. GATT was an ineffective system, Professor Avv. Sacerdoti explained, with numerous instances of noncompliance with its decisions and of exceptions to the rules. Under GATT, an initial series of trade negotiations concerning tariff reductions was held; later negotiations included anti-dumping and non-tariff measures. The WTO resulted from the "Uruguay Round" of negotiations, held from 1986 to 1994. 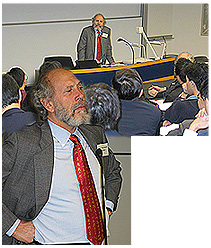 tribunal, the first stage is consultation for up to 90 days, during which negotiation and mediation is possible. In the second stage, a panel deliberates for up to six months and then issues its findings. This panel's conclusions are difficult to overturn. "Criticisms have been leveled that the system is too strict," Professor Sacerdoti observed, "and some claim there are unfair benefits to smaller countries and that litigation is a way to gain time in a trade dispute. True, the system isn't perfect, but it is certainly impressive and generally successful."

The AB, made up of impartial experts, reports to the DSB, which systematically adopts its recommendations that, thereby, become binding decisions. Why? According to Sacerdoti, this is partly because the AB's legal eagles examine the facts and the law with an unbiased eye, and partly because, once endorsed by consensus of the DSB, it has the entire weight of the WTO behind it. Furthermore, the implementation mechanism is monitored by the DSB; the community cannot act unilaterally.

Sacerdoti's insider accounts of disputes, one concerning the export of apples from the US to Japan, and another to do with the export of lumber from Canada to the US, were particularly informative. During the Q&A session that followed, interest was expressed by the audience of some 70 people in learning more about the WTO dispute resolution system on a future occasion.

Professor Sacerdoti has held various posts in the public sector, including Vice-Chairman of the OECD Working Group on Bribery in International Business Transactions (since 1999), and Consultant to the World Bank (1999-2000) in matters related to international investments, trade, development and good governance. In the private sector, he has often served as arbitrator and chairman of arbitration tribunals and in ad hoc arbitration proceedings for the settlement of international commercial disputes. After graduating from the with a law degree in 1965, Professor Sacerdoti obtained a Master in Comparative Law from in 1967. He was admitted to the bar in 1969, and to the Supreme Court of Italy in 1979. He is a Member of the Committee on International Trade Law of the International Law Association.