About 50 pieces of Buddhist sculpture from the Northern, Sui, Tang, Liao and Song dynasties, and copies of Tang epitaphs are now on display in the exhibition "Compassion and Fascination: Ancient Chinese Buddhist Sculptures" at the CityU Gallery. The exhibition, organized by the Chinese Civilisation Centre, showcases selected works from among businessman Mr W Y Chang's vast private collection.

"Compassion and Fascination: Ancient Chinese Buddhist Sculptures" offers visitors an opportunity to appreciate the works of creativity and to dwell on the prospect of Chinese civilization. "Buddhist followers carved sculptures in caves with the mission of spreading Buddhist sayings," writes CityU
President Professor H K Chang, in the foreword of the exhibition catalogue, jointly published by the Chinese Civilisation Centre and Wenwu Press. "At the same time, these figures are also a concretization of exquisite craftsmanship and toil as they were brought about by each creator's absolute religious devotion and yearning for culminating the soul and mind."

Mr Chang developed a love for art when he was young. To him, the art of ancient has its origins in the distant past and is rich in content. This inspired Mr Chang to turn the hobby of collecting into an educated pursuit of Chinese antiquities. After reading Osvald Siren's Chinese Sculpture from the Fifth to the Fourteenth Century, he began to understand how representative works of Chinese cave temple sculpture were destroyed and lost during political turbulences and wars in the past hundred years. "Fascinated by the beauty and artistic value of the Buddhist sculptures, I decided to study and collect them," he said. 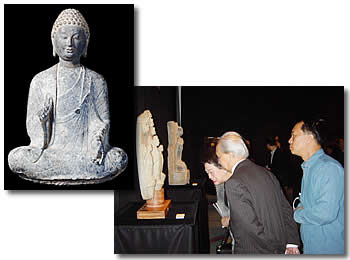 During his business trips to the mainland and different parts of the world, Mr Chang has made frequent visits to caves, temples, museums, and antique fairs and developed a wide network of friends with similar interests. Through years of assiduous effort, he has been able to assemble numerous pieces of stone sculpture, and increased his knowledge and appreciation of Buddhist sculpture art. "Mr Chang's collection offers us a glimpse of the many styles of sculpture," Professor Cheng Pei-kai, Director of the Chinese Civilisation Centre remarked. "We see a plethora of expressions, from the elegant and lithe to the unassuming and austere, and from the serene and benevolent to the noble and spiritual."

"Compassion and Fascination: Ancient Chinese Buddhist Sculptures" was opened on 16 January by Professor Y S Wong, Vice-President for Administration; Professor Jin Weinuo, Professor of Art History, the Central Academy of Fine Arts, Beijing; and Mr W Y Chang. The exhibition is open to all, from 10 a.m. to 7 p.m. daily at the CityU Gallery until 31 March.