A hundred students and staff packed the Screening Room of the School of Creative Media (SCM) in the evening of 22 October. They were watching Night Corridor, an independent movie directed by SCM Assistant Professor Mr Julian Lee. 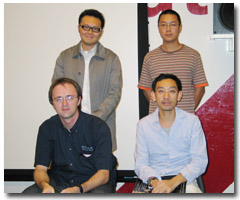 After watching the film, students asked about its ultimate message. Mr Lee stated that there were no specific ideas or concepts behind it, and this was simply a nightmare about family problems and an identity crisis that a young overseas Chinese might encounter. Mr Lee did not deny that some of his own experience is reflected in the movie, but claimed it was not autobiographical.

After several rounds of applause, Mr François Tissandier, a renowned French critic of Asian movies, participated in the discussion after the screening. "To the very end of this film, there is no message—risky, but interesting," he observed. Mr Tissandier also screened the film at the Lyon Asian Film Festival in from 7 to 24 November and translated the subtitles into French. Translating the subtitles from the original English and Spanish, he worried that he could not perfectly render the story in French, especially its unique tone and style.

Six creative media students gained valuable experience by taking on different roles in the production of this movie, including film still photographer, script supervisor, and assistant editor. "I found that, in reality, film production work could be very different from what books tell me," said Peter Chang, who was in charge of taking film still pictures for this film. Li Ho, another student assistant, was delighted to get acquainted with Wong Chi-ming, a well-known cinematographer. "His lighting skills impressed me the most," he commented.

Now in his fourth year of teaching at CityU, Mr Lee believes that he should provide students with more exposure to sophisticated and serious art. "Students should never narrow their minds and skills by producing market-oriented work," he said. "We should look for more diversity in the form of art. This is very important to our society, at all times."