On 29 July, when Ng Cheuk-wah and Hui Kit-no, two information technology majors, presented their supply management software in Shenzhen at Astec Electronics Co Ltd, a partner in CityU's Industrial Attachment Scheme (IAS), they got a unanimous thumbs-up. Astec's senior management expressed keen interest in using as well as selling the product. In a short span of two months, the company gained a useful application that streamlines supply control; and the two students earned an invaluable jumpstart to their engineering careers.

Professor Roderick Wong, Dean of Faculty of Science and Engineering (FSE), headed a group of eight CityU staff visiting the 21 IAS students employed at companies in Shenzhen this year, to attend their project presentations on 28 and 29 July. In a whirlwind tour of four IAS partners, Astec, AV Chaseway, GP Electronics, and PerkinElmer, the CityU delegation observed the students' presentations, several in fluent Putonghua, and received positive feedback from the companies.

"The students are innovative and offer practical solutions to problems," said Mr Ng Teck Soon, PerkinElmer's General Manager. "I suggest the attachment should be extended to three or even six months." Mr Johnny Tsui, Managing Director of Astec Electronics, FSE's industrial partner since IAS was conceived in 2000, said that student interns always produce projects useful to the company. Mr Wilson Chan, an engineer at GP Electronics said that, with ample support for IAS interns from faculty, his team has benefited from the University's resources on advanced electronic testing and analysis facilities, as well as advice from teaching staff. 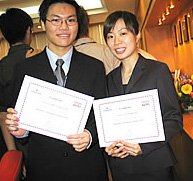 Many of the projects addressed real-life workplace engineering situations, for instance, setting up a new assembly line, automating a production process, and improving thermal conditions in a work environment. Some achieved concrete results; many have potential for further development into more powerful applications. Professor Wong noted that much of the students' success is attributable to their dedicated teachers, who touch base with them at least three times during the course of their IAS placement. To date, about 50 of the 200 FSE teaching staff have participated, a figure Professor Wong finds very encouraging, given the voluntary basis of the scheme. "I feel that I have support from staff members in this endeavour. The students are really fortunate to have so many teachers going to such lengths to help pave the way for their careers."

Among the 357 job placements CityU secured this year, about 147 are located on the mainland--a significant 41 percent. "Do you want to work in China after you graduate?" was the question Professor Wong raised to each of the student after project presentations. The answer he got was unanimous. "Yes. Job prospects are bright here." Asked what they cherished most about their attachment experience, some quoted friendship and a project accomplished; others mentioned the opportunity to brush up their Putonghua and the exposure to a different culture and lifestyle; all agreed that the experience would give them an edge in seeking a career on the mainland.