"South Asian people have been living in our community for years. They hold valid identity cards. Some can even speak fluent Cantonese. But somehow, we seem to have ignored them; they seldom come into contact with us. Why?" Final year Social Work student, Keith Wun, has been inspired to think hard about the question while working as an active member of the Social Integration Project for Ethnic Minority People in Hong Kong. The project is an out-of-classroom learning experience for Working with Communities and People with Special Needs, an elective course offered by the Department of Applied Social Studies (SS) in the year 2003.

The course focuses on the issues of social seclusion, discrimination and oppression -- a situation many of the students find relevant to South Asians in Hong Kong, such as Indians, Pakistanis and Nepalese. Encouraged by the pioneering work of alumna Ms Fermi Wong, founder of Unison Hong Kong for Ethnic Equality, a voluntary organization promoting ethnic equality, and prompted by the prospect of legislation against racial discrimination soon to be introduced in Hong Kong, 25 students in the elective course decided to do something to direct public attention to the needs of a neglected social group. So, the Social Integration Project was born in January 2003, with the students forming a Working Group, in collaboration with Unison Hong Kong for Ethnic Equality, and under the guidance of their instructor Dr Kam Ping-kwong, Associate Professor of SS. 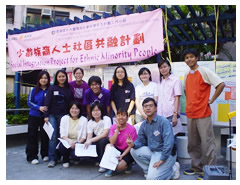 "The project is totally the students' brainchild," said Dr Kam. "I give advice and encouragement only now and then." From applying for sponsorship from the department's Maximizing Students' Learning Fund, and staging a street exhibition of career information for these minorities, to conducting a survey on the "Employment Situation of South Asian People in Hong Kong," developing the core task of the project, and subsequent follow-up on the survey, the students planned and enacted every step independently. 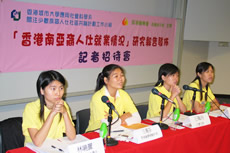 From 13 to 21 March, the Working Group, with the help of 14 South Asian students from Sir Ellis Kadoorie Secondary School, interviewed 402 South Asians for the survey. On 8 June, the results were announced to the press. If not for the occurrence of SARS, their research findings would have been compiled and released earlier. "When you consider the voluntary nature of participation, the need to prepare for examinations and to hand in numerous papers during the period, what they have achieved is amazing. I am particularly touched by the concern they've shown for a group of underprivileged people in Hong Kong," said Dr Kam.

"The project is not for credit, but we have learned much more than from books and lectures alone," commented Debby Wong, another student participant in the project. "It also provides us with a rare opportunity to speak out on an issue we think worthwhile." What she cherishes most is the relationship she built up with a group of South Asians. "Some of them came into contact with local ethnic Chinese for the first time when we approached them on the street or paid them home visits, but they reacted positively, knowing that we were trying to help them improve their lives. That makes me feel good."

"What strikes me is that there is such a sizable community in Hong Kong, deprived of equal opportunities to work and study. Many South Asians are young, talented and willing to work. All they lack is opportunity," said Tammy Lee, also a project participant. "My perspective as a would-be social worker has been broadened; I should not confine my attention to youth problems like I did before taking on this project."

According to the students' survey, about 340,000 people of South Asian descent live in Hong Kong, a metropolis touted as "Asia's world city." Among the 402 survey respondents, mainly Nepalese (66.7%), the majority was made up of male (89.6%) permanent residents (67.2%) with upper secondary school education (72.6%), who are not currently on any social security scheme (88.1%). Most of them find it difficult to find a job in Hong Kong - 40% are unemployed; 60% have experienced unemployment in the past two years; 70% are engaged in low-skilled occupations such as construction work or security.

The language barrier poses the biggest obstacle. Over half of the respondents said they have been rejected by employers because they do not speak Cantonese; a third have been turned down simply because they are not Chinese. Some said they have been excluded from jobs that are advertised only in Chinese. Even in the workplace, nearly half of them find it difficult to communicate with Chinese supervisors and colleagues. Other problems include not receiving salary on time, being bullied, and being fired unjustifiably. Over 40% of them have been treated unfairly at work, which includes excessive workload, lower pay and higher chances of being laid off than local Chinese colleagues. Nearly 40% said they have come across racial discrimination in the workplace. 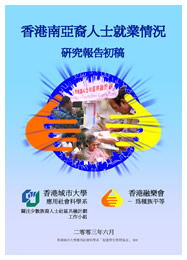 From the results of their survey, the Working Group developed the following recommendations to promote ethnic equality:

The Working Group will also present its findings and recommendations to officials in the Home Affairs Bureau and the Labour Department.