A cool and calm figure in stylishly somber black, the curator of Third Text: images + media 03* in the School of Creative Media (SCM), Mr Ip Yuk-Yiu escapes from an office brimming with color. He guides me through the portal of the exhibit — I am about to enter a hi-tech zone, an esoteric womb of wonders that seem like science fiction. Here, in a disorienting cacophony of dramatic piano music, beeping, droning and announcements, Mr Ip takes me to the cutting edge.

Because it's new, you're not supposed to know exactly what it is; the school is taking the role of leader to define new creative media," he explains as we pass from a hall with veiled computers through a tunnel of projections flashing on the wall. "One of the missions of this school is to explore new territory; to expand the boundaries of the use of technology. We promote a critical and creative way of thinking." From chaos into clarity, we now stand in an open, airier space, and I feel like I am in a theme park, if no longer in the haunted house. Multiple computer screens dot this space fashioned from a car-park, displaying images as though they were framed works of art in a gallery. "We want to present media as a tool that students become familiar with and confident using. I don't see a vast difference from painting, in this regard. You have to master paint. Creatively speaking, this is no different — you have to master the media." Mr Ip is trained in fine art. 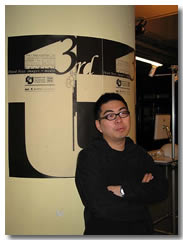 The idea behind Third Text, comprising digital animation, experimental cinema screenings, a seminar, Web-based art and interactive installations, according to Mr Ip, was to offer something fun to the public, to promote CityU and the School of Creative Media. He initiated this contemporary media art-making extravaganza. By inviting his own contacts via e-mail, and by following up on their recommendations, he was able to generate an impressive list of participating artists from around the globe, including Dietmar Offenhuber (Austria), Michael Snow (Canada), and Kano Shiho (Japan). "They are excited to get involved in this alternative platform, especially in Hong Kong." Locally, Videotage's Microwave Festival is the only similar event.

In addition to its international line-up, Third Text also features works by CityU alumni, students and faculty members. Mr Ip introduces me to "Fruztum: Nomadic Vision", a media installation. Dr Hector Rodriguez , Associate Professor, SCM and Mr Mike Wong , Assistant Professor, SCM, are the artists responsible for this anomaly. "Using a game console, you manipulate an object in 3-D space and see things in a new way," Mr Ip enthuses. "You have to try it." I try it. I don't usually play video or computer games and I really don't expect to play with Einstein. As I push the buttons, two images of Einstein's disembodied and hairless head, suspended in space, roll over one another, without touching — bizarre. I feel a bit uncomfortable as they loom closer and then zoom away. I think, "Heads will roll!" Smiling, I keep it to myself.

One colleague said she felt like throwing up afterwards," Dr Rodriguez tells me. Dr Rodriguez, a graduate of New York University, has been with the multi-discipline SCM since its inception in 1998. "It's about de-familiarizing your experience of space through systematic disorientation," he expounds. "I wanted to do something with divergent perspective; I initiated the project." Patiently, he explains the notions of divergent perspective and of subverting major technology by using it for a purpose very different from that for which it was created, so it becomes "minor technology." Soft-spoken and friendly, Dr Rodriguez praises Mr Wong, "It's really thanks to Mike. Mike's idea was to take a piece of technology that has been used in a very limited way, (Dreamcast), and, so to speak, subvert it. We worked the concept together. I was the theorist; my contribution was very modest. It took Mike only about three weeks to put it together. He's a genius." Mr Wong won the Golden Horse Award, Best Digital Effects in 1998, for his work on StormRiders.

The line between the established and the experimental becomes blurred as artists overcome a tradition of distaste for the business world. Many eke out a living by doing special effects for commercial ventures. Putting together an annual festival such as Third Text takes more than just inspiration — while most of the equipment was provided by the University, Mr Ip also actively sought support from the commercial sector, and got it. In these tough economic times, that's encouraging.

The playfully enigmatic nature of Third Text reminds me of Fluxus, the avant-garde arts and media synthesis movement that originated in New York City in 1960. Fluxus has influenced artists around the globe, and although many remain relatively unknown, a comprehensive exhibit on the history of Fluxus was held in Hong Kong in 2002.

Fluxus member, Dick Higgins, is known for coining the term "intermedial moment" — when categorization is denied and "pure media" yields to an intermingling of visual arts, music and the literary. Thanks to the School of Creative Media , CityU enjoys more moments like these than ever before.