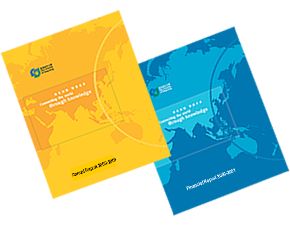 The Reports, titled Connecting the World Through Knowledge, won a Silver Award in the financial data section and an Honours Award in the non-profit organizations section. CityU's reports were ranked among the best in a record number 1,600 entries.

The University Publications Office (PUO) is heavily involved in the design, writing and publishing of the Annual Reports. "We are very pleased with the results this year," said Mr Patrick Kwong, PUO's Director. "It's very gratifying to know that our Annual and Financial Reports rank among the best in the world."

The ARC Awards, established by MerComm, Inc in 1987, were created to honor overall excellence in annual reports, and to encourage noteworthy and vital writing, as well as imaginative and original design. This year, nearly 1,600 entries in 12 major categories were submitted by some 800 different companies from 20 countries representing over 170 industries. During a three-week period, the distinguished international panels of judges read and evaluated the annual reports.

Criteria used to choose winners included Cover Design, President's Letter, Writing, Interior Design, Financial Presentation, and Overall, how well the spirit of the company is reflected in the annual report.