CityU's Students' Union must act as a bridge between students and University management while striving to create a united and democratic campus, said Council Chairman Mr Norman Leung at the 17th Students' Union Inauguration Ceremony on 5 March. 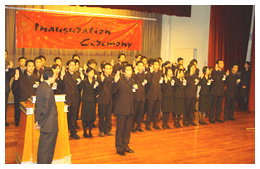 The new executive committee was elected last year after a three-month voting campaign. Pledging to work for those who elected him, the Mr Wong, a first-year student in the Department of Economic and Finance, asked students to care more about university affairs, social issues, and about the mainland.

Students were impressed by the inauguration ceremony and expected the new Students' Union to better reflect their views.