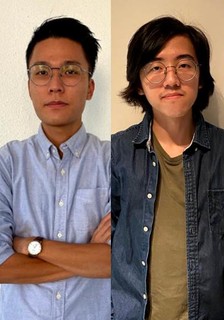 When CityU launched the Jockey Club Enhancing Youth Empathy Project through Immersive Visualisation (the Project) in 2017, Year 2 students Ng King-kwan and Michael Tam Ming-hong in the School of Creative Media (SCM) were attracted by the concept of "empathy", which was rarely featured in the rating scheme of any competitive games or projects they had previously entered.

They thought it was an excellent chance to put their creativity to the test and to find out how innovation enhances youth empathy to help social inclusion.

Led by CityU and funded by The Hong Kong Jockey Club Charities Trust (the Trust), the Project utilised the University's renowned strengths in immersive visualization technology to respond to the needs of the ethnic-minority groups, the elderly and people with disabilities, as well as nature and the environment.

The Project participants were encouraged to develop their skills through "perspectivetaking" and "role-taking", and create innovative solutions that meet the challenges and problems faced by different groups.

After joining the Project, Ng King-kwan and Michael soon found themselves making multiple visits to care homes and other facilities housing older residents, with social workers and care-takers of the elderly. For about a month, they received sufficient training opportunities to allow them to learn from healthcare professionals about the harsh challenges faced by seniors, including those suffering from dementia or stroke, or other chronic diseases.

The month was a thought-provoking one for them. "Before the training, I understood little about the issues many older people must endure on a daily basis," said Ng King-kwan. He admitted getting frustrated by things as basic as communication. He had to make every effort just to speak to the older residents at the start of training.

"It also surprised me at first how quickly some of the older residents can throw a tantrum like a child for seemingly no reason at all," Michael said. "But now, thanks to communication training and multiple visits provided by the Project, we understand. We also remind ourselves frequently that it may take time for older people to process information, resulting in a delayed reaction." There has been a marked change in the young men's empathy.

They wasted no time in designing "the Interactive Projection Game", which helps elderly people with dementia maintain their cognitive skills in an entertaining and engaging way.

Professor Matthew Lee Kwok-on, Project Leader and Vice-President (Development and External Relations), said he was proud that the Project had such an impact, "The Project reached 130,000 beneficiaries, and won 15 international and local awards, and the innovative tools developed in the Project were applied by over 60 NGOs."

"Building empathy and enhancing social inclusion are long-term challenges," he added. "With the full support of The Hong Kong Jockey Club Charities Trust, we are happy that the Project has made a good start."

Ng King-kwan and Michael said they were grateful to the Trust for supporting the Project, which gave them the opportunity to receive professional advice from faculty members and professionals, as well as equipment and financial assistance. In addition to numerous visits to homes for the elderly, they made the most of opportunity to join exhibitions and competitions.

Ng King-kwan and Michael graduated from the SCM, but over the past three years through communication exchanges with less privileged community groups, older people and supporting organisations, the duo saw the real-life impact of their creation in delivering social value, and the experience helped them develop empathy for groups in need. They are presently involved in another Jockey Club funded project, CoolThink@JC. This is another chance for them to put their empathy and creativity gifts to good use – this time for a much younger audience!