CityU is to break the Guinness World Records with a dragon painting composed of more than 10,000 hand prints. Staff, students, alumni and CityU friends printed their palm images on a giant canvas on 14 November, the “action day” of City Dragon, a festive highlight of CityU’s 20th Anniversary. The partially completed painting which measures more than 300 square metres, has already met the Guinness break–record requirement of 210 square metres.

Kicking off the City Dragon action day, CityU President, Professor H K Chang said, “This activity nurtures a sense of belonging to the University. Twenty years, or 200 years later, people will see the glory of CityU as created by our own hands.”

Dragon is a symbol of dignity and energy in Chinese culture. The Students’ Union organized the event to demonstrate the spirit, creativity and solidarity of CityU community. It also aimed at breaking the Guinness World Records.  “CityU has made significant achievement in a short span of 20 years. Today, all of us will have a chance to contribute to our university,” said Mr Kelvin Chan, President of Students' Union at the opening ceremony.

On the Action Day, everyone on campus was excited with their hands full of colors. Professor Edmond Ko, Vice-President (Undergraduate Education) and Dean of Students, commented that the activity was a special and meaningful way to celebrate CityU’s 20th anniversary. 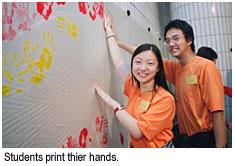 Flocks of students, staff, their families and friends gathered at the Covered Terrace to paint their hands colorful and flashy before stamping on the dragon. A student, Mr Sunny Shi, was attracted to the fun and excitement. “It makes me feel proud of being 20 and being a student of CityU,” he said.

Many staff members brought along with their kids and family members. The children enjoyed the palm painting and kept trying different colors and stamping their little palms on the painting. The Covered Terrace was turned to a carnival full of laughter, colors and taking-snapshots. Ms Wanda Lau, a Staff Association member, said, “I’m sure we could create a record.” 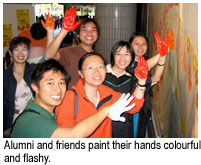 Many alumni came back to join the delightful event. Ms Celine Wong, an alumni, brought her two little daughters with her. She said, “I never realize CityU has changed so much until I came to join the painting. It gets more and more beautiful with more advanced amenities.”

The idea of dragon painting was created by Ms Windy Wong, Recreation Secretary of Students’ Union and co-coordinator of the activity. Having prepared for more than half a year, the Students’ Union organized the activity with the help of the Student Development Services. Windy was confident that they would break the Guinness World Records.  Combining the various parts of the hand painting together, a golden dragon will be created; and it will be examined by the authority of the Guinness World Records. The Golden Dragon will be exhibited on 20 December at the grand closing ceremony of CityU’s 20th Anniversary.