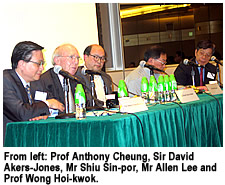 Marking the University's 20th anniversary, CityU presented a seminar called “ Governance 1984-2004: Continuity and Change” on 1 November. Speakers were invited to review ’s political development over the past 20 years and to discuss the likely challenges to governance in the years ahead.

The seminar was organized by the Department of Public and Social Administration (SA). The renowned speakers included: Sir David Akers-Jones, former Acting Governor and Chief Secretary and the current Chairman of the Departmental Advisory Committee of SA; Mr Shiu Sin-por, Executive Director of the One Country Two Systems Research Institute; Mr Allen Lee Pang-fei, a freelance commentator with extensive experience in public governance; and the SA’s 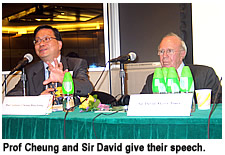 Professor Anthony Cheung Bing-leung. All have long taken a special interest in the Government and politics. The speakers addressed the key features of governance and its transformation from the mid-eighties to the post-1997 period. Topics such as “Universal Suffrage” and “Disempowerment of the Administrative Class” were covered.

In 1984, was near the start of the transition process towards the handover in 1997. Today, the Special Administrative Region is still grappling with many fundamental issues raised by the handover. “In 2004, is a partial democracy with a vocal community demanding accountability and participation,” Professor Cheung 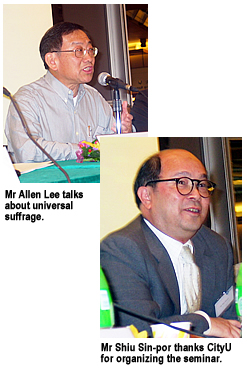 remarked. “The rise of people power in 2003 put on a path of no return towards election by universal suffrage.” Mr Allen Lee echoed this view, adding, “The democratic parties should unite and urge the central Government in to set a time-table for implementing universal suffrage for .” Sir David Akers-Jones shared his perspective on the future governance of , emphasizing that there would be changes in 2008 and that people should look into the improvements planned for the system.

Other academics and students also shared their opinions with the speakers. Mr. Shiu thanked CityU for organizing the seminar. “I hope CityU will continue to make valuable contributions such as this to Hong Kong education and society,” he said.