Kicking off the Cultural Fest@Library

Rarely has a cultural festival exuded so much energy and zest in its opening ceremony. On 29 March, the "Hanbok Exhibition" opened in CityU's Run Run Shaw Library not only with a static display of the exquisite Korean national costume, but also a dynamic and potent demonstration of the traditional Korean martial art, Tae Kwon Do. Students and staff were given a sample of the Korean culture, from two different sides.

"The aim of the exhibition," said Professor Eden Yu, Acting Librarian, at the Opening Ceremony, "was to introduce students and staff of CityU to a diverse cultural understanding." The display of three sets of Hanbok, donated by the Consulate General of the , forms the first Cultural Fest@Library, an initiative focusing on the East Asian cultures of and . A Hanga (Japanese woodprints) display was held earlier this month, and a small display of Japanese and Korean art will be staged in the lobby area until 30 April. 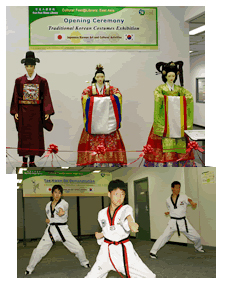 The study of Korean language and culture has fast become a popular elective among CityU students. Since their introduction in 2001, the Korean courses, coordinated under the Division of Language Studies, have attracted more than 1,400 students. "What we offer in this area are the largest in scale and most established among local tertiary institutions," said Ms Wanda Lau, Head of the Division at the ceremony. The Division co-organized the series of cultural activities with the Library. The Division also offers several scholarships for students on exchange programmes to , one of which is the Kyung Hee University, .

The significance of the events, said Professor H K Chang, President, exemplifies the cultural diversity of . The ability to understand and be well-versant in cultures of other countries, in particular those of our neighbours, is important to enhancing 's unique position and the long-term prosperity. The activities also show CityU's commitment to encourage staff and students "to pursue whatever cultural elements that may interest them," he added. Lastly he cited an example by historian Samuel Huntington to illustrate how culture has helped propelled to rise ahead of in less than 50 years when the two countries, in 1960, were also on the same level of economic development in terms of gross national per capita.

The Hanbok Exhibition was officiated by Mr Kang Keun Taik, 's Consul General in and the Tae Kwon Do demonstration was led by master Mr Moon Myoung Gon, Chairman of the Korean Tae Kwon Do Association in .