Four students taking elective French courses at City University's Division of Language Studies gained valuable experience and self-confidence by participating in the first ever French speech-writing contest organized by the Consulate-General of France in Hong Kong. 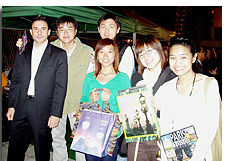 Mr David Santandreu , Lecturer and Coordinator of the French Section, Division of Language Studies, expressed great delight that one of his students was among six champions in the contest. "Although all of the other universities presented excellent candidates and most of them are in their final year of their BA studies in French, all of our participating students produced incredibly creative work within a very strict deadline,"he said. "They made it!"

With the support of the "Parentheses"bookshop, the Consulate-General of France in Hong Kong, along with the Consulates General of Belgium, Canada, Egypt, Laos, Switzerland and Vietnam, and the Alliances Francaises of Hong Kong and of Macao, organized the contest for anyone between the ages of 18 and 25 in Hong Kong and Macao and whose mother tongue is not French.