The Run Run Shaw Library has received a generous donation of Japanese hanga (woodprints) from Mr Denkichi Omi. An exhibition is now being held on Mr Omi's selected works in the Library Lobby.

1955. Many of his works, such as "Scenery of Snow World" and "Woodprints from hometown", are inspired by the serenity and landscape of his hometown.

Mr Omi has won top prizes in numerous competitions and exhibitions. Starting from 1989, he has held solo exhibitions in Japan, Korea, Hong Kong, and Singapore. He has also established the Snow Country Youth League to promote cultural exchange between the central part of Japan and Tokamachi.

Since 1996, he has organized a series of exhibitions, performances and workshops in Niigata and Hong Kong, including the " Niigata-Hong Kong Cultural Exchange 2004 in Hong Kong " held recently in City University of Hong Kong. 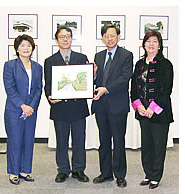 The donated collection from Mr Omi has enriched the Library¡¦s cultural "treasure trove". A ceremony acknowledging his generous donation was held in the Library on 20 March.

Professor Eden Yu , the Acting Librarian. thanked Mr Omi for his generousity. The Library was very honored to have Mr Omi to "kick off" the Cultural Fest@Library, which is co-organized with the Division of Language Studies.