"Each city needs its own cultural positioning," Visiting Professor Dr Lung Yingtai, an influential Chinese writer of international stature and former Director of Taipei's Cultural Affairs Bureau, said. "Culture is not just about dancing and singing. It is an industry that forms an important part of a country's overall strength," she told more than 20 reporters in a press conference held at CityU, 27 August.

After stepping down from public office 10 February, Dr Lung accepted CityU's invitation to teach in the Department of Chinese, Translation and Linguistics for the current academic year. "I know Hong Kong is going through a difficult time, but, as a guest here, I believe I will be able to find the space I cannot find in Taiwan to think, reflect and write quietly." Dr Lung hopes to write a book about the importance of a city's cultural industry and how to establish such an industry. It will be based largely on her three-year experience working as Taipei City's first culture chief and her lifelong interest in observing and commenting on urban cultural and social phenomenon. 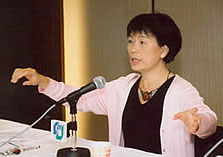 Dr Lung also believes it is time for the major Chinese cities in Asia—Shanghai, Beijing, Guangzhou, Shenzhen, Singapore, Taipei and Hong Kong—to work closely together and come up with blueprints for creating cultural industries. Now each realizes, she said, the importance of establishing a real cultural industry of its own. "But what's next? What do you need to do in terms of the regulations and the organizational structures? It is ridiculous that they haven't got together to discuss this issue."

Dr Lung, author of 13 books--essays and criticism--has previously taught at Taiwan's National Central University, Tamkang University, New York's Mercy College and the University of Heidelberg in Germany. "This is the first time I've come to live in a Chinese city outside Taiwan. Hong Kong's location will give me a fresh angle from which I can observe Taiwan and the mainland, even Singapore." Dr Lung, having lived in the West for more than two decades, said Hong Kong would also help re-connect her links to the West, which were largely cut off in the three years she worked in Taiwan. "I knew that if I wanted to make a real difference there, I needed much more time. But I also needed to be a writer

again," said Dr Lung, commenting on her stepping down as Taipei's cultural minister after a three-year stint. Dr Lung includes her email address in the newspaper and magazine columns she writes, and while she regularly receives reader responses from Taiwan, mainland China and Singapore, she admitted to getting very little from Hong Kong. One of her ambitions this year in Hong Kong is to find out why.

Dr Lung will speak at CityU's Wai Hing Theatre, 4 September, on "A Cultural 'Renaissance' of Chinese Cities—Is It Imaginable?"