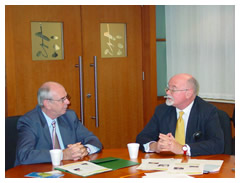 The Council and TNC Division has been set up to service the General Council, TNC and the Dispute Settlement Body. Mr. Rogerson was welcomed by Professor Peter Malanczuk, Chair Professor in the School of Law and Director of the WTODR Centre. Mr Rogerson said he was very impressed by the work of the WTODR Centre and the progress it has made in such a short time. He said he would maintain contact with the Centre in the future and invited Professor Malanczuk to visit him in Geneva.

Mr Rogerson is one of the most influential Directors in the WTO Secretariat as he provides support to the Director-General and the General Council Chairman on major negotiations matters and matters at political level. He maintains a good rapport with the HKSAR delegation to the WTO.