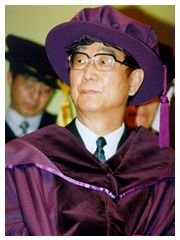 Professor Qu has devoted himself to the development of China's environmental policies, laws and management, administrative organizations, research institutions and education since attending the 1972 UN Conference on Human Environment in Stockholm as a member of the Chinese government delegation.

Senior Adviser on sustainable development to the UN Secretary General, Professor Qu is the recipient of numerous international prizes and awards, including the Sasakawa Award in 1992 and 's International Blue Planet Prize in 1999. He was conferred Honorary Doctor of Science by at its 17th Congregation on .