The Centre for Cross-Cultural Studies played host to a two-day conference in September on 's deep and longstanding association and Jewish people. 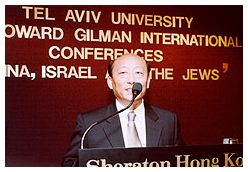 The Howard Gilman International Conference: ", and the Jews," on 24 and 25 September, was organized by the Centre for Cross-Cultural Studies and the Tel Aviv University of Israel. At the conference, speakers from , , the Chinese mainland and discussed Chinese and Jewish perspectives on history, religion, philosophy, as well as the Jewish community in and relations between and the . 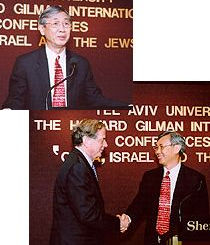 At the reception on 24 September, CityU President H K Chang welcomed about 100 conference attendees to , and spoke briefly about the rich associations shared between Chinese and Jewish people. of President Itamar Rabinovich also spoke at the welcoming ceremonies and thanked the Centre for Cross-Cultural Studies for all the help organizing the conference.

The Director of the Centre, Professor Zhang Longxi, delivered a talk on Jewish and Chinese diasporas. "The word 'diaspora' in its normative usage indicates the dispersion of Jews and the settling of Jewish communities after the Babylonian captivity," said Professor Zhang. "More generally, it refers to Jews living outside of or modern . In recent decades, however, discussions of cultures and communities other than the Jewish have often applied the word 'diaspora' in a much expanded sense to include other minority groups living outside their native land. The term has been used in a broad sense with reference to overseas Chinese communities, so perhaps it is time we looked at Jewish and Chinese diasporas together."

In all, 14 speakers spoke at the conference, which concluded with a talk by Mr Eli Avidar, Consul General of Israel in . 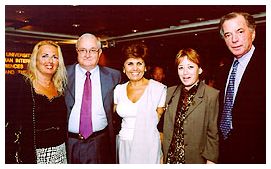 Mr Avidar recapped many of the ideas expressed at the conference, stressing that and gets along so well because both countries understand the importance of keeping business out of politics. "We share similar moral values that help with our long history of good relations," said Mr Avidar.

The Centre for Cross-Cultural Studies (CCS) promotes research on the interactions between Chinese and other cultural traditions, particularly but not exclusively East-West studies. The main research focus of the Centre is East-West cultural relations. The Centre supports research that investigates the history and complexity of the understanding of in the West, and also understanding of the West in .