CityU hooks up with US Congress

CityU and the US Congress were linked this week through video conferencing facilities as the University played host to the first American Studies Institute in Asia (ASIA) seminar.

Professor James Nathan, Professor of Political Science and Khaled bin Sultan Eminent Scholar at Auburn University-Montgomery, and Professor Charles Tien Associate Professor in the Department of Political Science at Hunter College, City University of New York, led the event, organized by CityU and the Hong Kong-America Center, and sponsored by the US State Department and Hutchison Whampoa Ltd. The theme of the seminar was "The Role of Congress if American Foreign Policy".

The week-long event attracted some 25 academics, officials and journalists from throughout . On the mornings of 6 to 9 of August, the seminar was linked with for interviews with key Congressmen, Congressional staffers, lobbyists and academics. The guests in included: Congressman James Leach of the First District of Iowa, Mr Brian McKeon, Democratic Chief Counsel of the Senate Foreign Relations Committee, and Gregory Treverton, Senior Fellow at the Pacific Council on International Policy in . 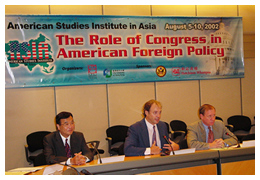 "In communities in and across the globe, the fates of individuals are often directly or indirectly affected by decisions taken in ," said Professor Y S Wong, Vice-President for Institutional Advancement in his welcoming speech on 5 August. "It is therefore entirely appropriate that the first meeting of the American Studies Institute in Asia focus on the making of American foreign policy, and in particular on the role of Congress." 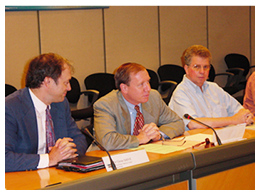 Indeed, the seminar focused on two key questions: "What does Congress do in the making of foreign policy?" And "Why does Congress do what it does?" At the 9 August teleconference with , the guests at CityU included Mr James Keith, the US Consul General for Hong Kong and Macau who assumed duty on 1 August, who thanked CityU and the Hong Kong-America Center for organizing the seminar."I can't think of a more appropriate presenter than Congressman Leach on this issue," said Mr Keith. 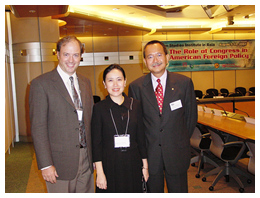 In his presentation, Congressman Leach, speaking from , explained that the answers to the questions posed by the seminar are not simple. "It's hard to speak of Congress as a whole with 435 members representing a wide array of public opinion," he said. "You have a lot of individuals and ebbs of flows of judgment that can be applied institutionally."