An evening with Mozart

Concertgoers were treated to a fine evening of Mozart on 24 February as the City University Philharmonic Orchestra performed its annual concert at the Hong Kong Academy for the Performing Arts. 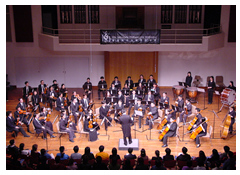 More than 200 fans of classical music packed the concert hall to listen to the University orchestra's performance. The programme consisted of: Overture from The Abduction from the Seraglio, Andante for Flute and Orchestra in C Major, Oboe Concerto in C Major and Symphony Number 41 "Jupiter". 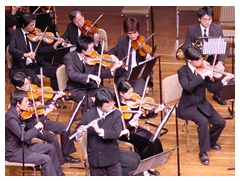 The orchestra performed under the direction of resident conductor, Mr K K Chiu. The flute solo was performed by Chris, the orchestra's flautist.

The concert was organized by the Cultural and Sports Committee.