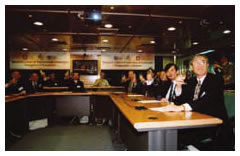 In a display of the sort of technological wizardry that has shrunk our world over the past 10 years and injected new meaning into the words "global economics", CityU President Professor H K Chang and University of Washington President Professor Richard McCormick linked up by video conference to inaugurate the Research Centre for International Economics (RCIE), a joint venture aimed at furthering economic research activities between the two universities.

At the official opening in January, Professor Chang reminded the audience on both sides of the Pacific that despite the rapid advances in technology, most of the world remains left out of the global village. "I hope that our scholars in Hong Kong and Seattle will work on these very important issues," he said. In his remarks, Professor McCormick said he hoped the research centre would provide a platform for the rich flow of information and ideas between the two universities.

More universities have come into partnership with RCIE, which is playing an important role in promoting international economics study and activities in the region.