Chinese culture takes a look ahead 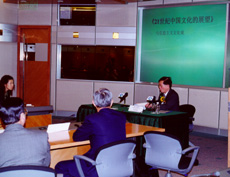 The inaugural CityU Distinguished Lecture, Prospects for Chinese Culture in the 21st Century, struck a sympathetic chord in an audience that has often struggled with the clash of Western and Chinese traditions.

The lecture was delivered on 12 February by Mr Liu Ji, former Deputy Chairman of the Chinese Academy of Social Sciences and one of the most influential thinkers in . "He has contributed much to the political and economic restructuring of ," said President H K Chang in his welcoming remarks.

In his lecture, at CityU's Multi-Media Conference Room in the , Mr Liu Ji said that 's culture, shaped by Marxism as well as centuries-old traditions, will be transformed once again by an increasingly global economy over the next 100 years.

This new Chinese culture, he predicted, will embrace all the influences that preceded it, and will benefit the entire world.