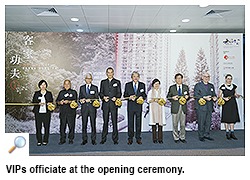 A precious aspect of Chinese cultural heritage is the star of a fascinating new exhibition based on the sophisticated use of creative new media and cutting-edge technology at City University of Hong Kong (CityU).
Hakka kung fu has been captured using unique 360-degree 3D motion capture technology in a project developed by the International Guoshu Association (IGA) and CityU over a period of several years. Together they have developed the world's first-ever kung fu heritage project: the Hong Kong Martial Arts Living Archive. 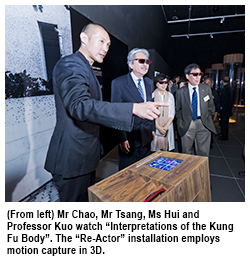 For three hundred years, the Hakka journeyed from their homeland in eastern Guangdong to the heart of the Lingnan region. From humble beginnings in the mountains, Hakka kung fu evolved new forms through continuous interactions with neighbouring peoples, as they gradually moved from rural villages into urban centres.
“The Hong Kong Martial Arts Living Archive established by IGA and CityU is a very good example of community support for preserving intangible cultural heritage,” said Mr Tsang, who is known for his passion for kung fu. “The exhibition allows the public to learn more about traditional Hakka martial arts and culture using creative media and art.” 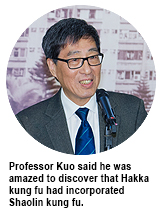 Mr Chao said he was thrilled that the exhibition was now open. “I am very grateful for the trust CityU and the Leisure and Cultural Services Department have put into IGA as a research entity,” he said, extending his heartfelt thanks to the entire team at ACIM.
Professor Kuo said CityU was known for its strengths in applied science and information technology.
“CityU takes up social responsibility by promoting local culture. I am proud of Professor Shaw and other colleagues who have contributed in this project,” he said. 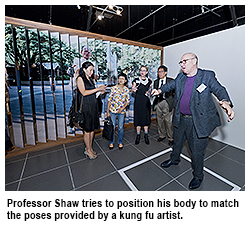 The month-long event is being presented by the Intangible Cultural Heritage Office, Leisure and Cultural Services Department and IGA. It has been co-organised by CityU and curated by the Hakka Kung Fu Culture Research Society and ACIM.
The exhibition will be held from 2 to 30 September. Later this year it will exhibit at CityU for two months before touring in overseas museums.
Details of the exhibition are available at www.hakkakungfu.com.
​