​City University of Hong Kong (CityU) will confer honorary doctoral degrees on Professor Frederick Ma Si-hang, GBS, JP, Mr Yeung Kin-man, JP and Professor Ada Yonath in recognition of their significant contributions to education and the well-being of society. The award ceremony will be held in October 2016. 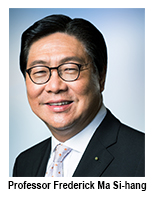 Professor Ma has an outstanding record of professional achievements. Since graduating from the University of Hong Kong in 1973, he has taken up major positions in various local and overseas banks, other financial institutions and major companies, including Chase Manhattan Bank, Royal Bank of Canada Dominion Securities, JP Morgan Chase Co., Kumagai Gumi (HK) Limited and Pacific Century Cyberworks Limited.

In 2002 he joined the Hong Kong SAR Government as the Secretary for Financial Services and the Treasury, and in 2007 he assumed the post of Secretary for Commerce and Economic Development. In 2009, he was appointed a Member of the International Advisory Council of China Investment Corporation, in 2013, he was made a Member of the Global Advisory Council of the Bank of America, and currently, he holds the positions of Independent Non-Executive of the FWD Group, Director of Husky Energy Inc., and Non-Executive Director of China National Cereals, Oils and Foodstuffs Corporation (COFCO).

In recognition of his substantial contributions to public finance, financial services and economic development in Hong Kong, he was awarded a Gold Bauhinia Star by the Government in 2009 and appointed a Justice of the Peace in 2010. 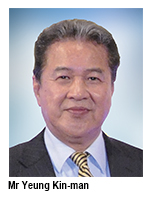 Mr Yeung was born and raised in Hong Kong and has a storied career, starting from scratch as an entrepreneur, setting up a watch glass manufacturing business at the age of 31, and developing it into a global leader of mobile phone glass covers and smartphone touch screens.

With his keen interest in research and development and a keen eye for innovation, his company developed rapidly. Mr Yeung first produced cover glass for watches on the Mainland in the 1980s. With the advent of the mobile phone, he quickly recognised the potential for making glass covers for mobiles, and later, touch screens for smartphones, making record breakthroughs.

Mr Yeung has been an active participant in public service on the Mainland and Hong Kong. His many present public roles include being a member of the Huizhou Chinese People’s Political Consultative Conference, member of the Shenzhen Longgang District Chinese People’s Political Consultative Conference, Consultant of Heung Yee Kuk New Territories, member of the Board of Trustee of The Better Hong Kong Foundation, President of the Hong Kong Industrial and Commercial Association, Executive President of the Federation of Hong Kong Guangdong Community Organisations Limited, Executive Vice Chairman of the Happy Hong Kong Charity Foundation, and Vice Chairman of the Guangdong Association of Enterprises with Foreign Investment, among others. He was appointed a Justice of the Peace in 2016.

In addition, Mr Yeung received many awards including the Fifth Outstanding Corporate Social Responsibility Award, and was named Leader of the Year 2015, The Third Global Touch Industry Most Influential Enterprise Businessman in 2015 and Outstanding Entrepreneur of Guangdong.

Mr Yeung has been involved in many different kinds of charity works, which have contributed a great deal to society and the nation. He received the Huizhou Philanthropist Award for three consecutive years and was made an honorary citizen of Huizhou. In 2015, he donated HK$200 million to CityU to support research and student exchange in veterinary medicine. 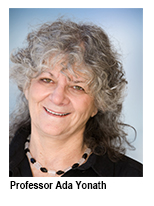 Professor Ada Yonath, a distinguished scholar and a Nobel Laureate in Chemistry, will receive an Honorary Doctor of Science.

Professor Yonath’s research interests are in protein biosynthesis and the antibiotics hampering it, pathogenic parasites and the origin of life. She received a bachelor’s and master’s degree from the Hebrew University of Jerusalem, obtained a PhD from the Weizmann Institute of Science (WIS), and held post-doctoral positions at the Mellon Institute and Massachusetts Institute of Technology, US.

In the seventies she joined the WIS, where she established the first structural-biology laboratory in Israel and currently she is the Director of the Helen and Milton A. Kimmelman Center for Biomolecular Assemblies at the WIS. From 1986 to 2004, Professor Yonath headed the Max-Planck Research Unit for Ribosome Structure in Hamburg, Germany.

Professor Yonath has received numerous honours and awards for her scientific accomplishments. She holds 27 honorary doctorates from universities in different countries, including the United States, the United Kingdom, Germany, Greece, Poland and the Philippines.

Professor Yonath received the Nobel Prize in Chemistry in 2009, along with two other scientists, for her studies on the structure and function of the ribosome, making her the first woman in 45 years to receive the Nobel Prize in Chemistry. Her other awards include the Israel Prize, Louisa-Gross-Horwitz Prize, Linus-Pauling Gold Medal, Wolf Prize, L’Oreal-UNESCO for Women in Science Award, and Albert-Einstein World Award of Science.