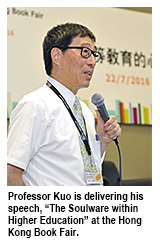 On 22 July Professor Way Kuo, President of City University of Hong Kong (CityU), delivered a speech — The Soulware within Higher Education — during the Renowned Writers Seminar Series at the Hong Kong Book Fair. Afterwards, he attended the Renowned Writers’ Works Recital to read a chapter from his new book and paid a visit to the CityU Press booth.

Professor Kuo shared his views on cross-strait higher education at the seminar. He summarised his thoughts in two self-penned poems, “Blind Soul” and “Soulware”, to outline his concepts of the separation of politics and education, and the integration of teaching and research, respectively. The poems are translated here from the original Chinese.

Blind Soul
Political bewilderment may not result from blindness of the eye,
Science and technology can make you stronger.
Difficulty in assembling torn pieces of paper becomes easy,
When blindness of the soul is cured by turning it upside down.

Soulware
Teaching is empty without devotion of the heart,
Research after all remains the utmost art.
Barely equipped with hardware and software,
Still it lacks, devoid of proper soulware.

A “blind soul” means the eyes can see but the soul is blind, said Professor Kuo.  In other words, having a degree doesn’t necessarily mean one has knowledge or is capable of solving problems. This is common among institutions involved in cross-strait higher education, he said. 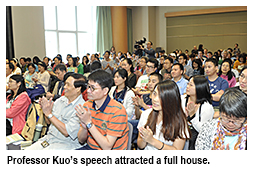 As an example, he mentioned a test he conducted in which highly knowledgeable professors and PhD degree holders failed to put a piece of blank paper back together after it had been cut into over 50 pieces. Yet a child was able to complete the task in just a short time, because he was very focused on it and quickly spotted that the back of the pieces of paper formed a map of Hong Kong, just like a jigsaw puzzle.

In Professor Kuo’s view, the blank paper can be likened to a blind soul that can only be cured when we turn the paper upside down.  He went on to explain that in the development of western higher education the medication has been found to cure the blind soul, but in cross-strait higher education politics often gets tangled up with education. “Without the separation of politics and education, the soul will stay blind,” he said.

In another example, Professor Kuo said that poor management was the main cause of the Fukushima nuclear accident in Japan on 11 March 2011. He pointed out that a well-managed nuclear plant should be operated by three balanced units. The first is made up of academic institutions that provide information, technology and human resources. The second is the government and the role it plays as supervisor. The third is the nuclear plant itself. But in Japan, most of the personnel who managed the three sectors (the supervision departments, the Fukushima nuclear power plant and the university experts) were graduates of Tokyo University with myriads of conflicting interests. They were confused about when they should manage and when they should not. The catastrophic accident that resulted was a good example of the blind soul and the entanglement of the three sectors. 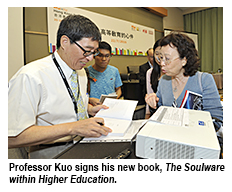 He illustrated this point by citing the case of Henry Kissinger. Kissinger is famous for formulating the theory of the balance of power. Before he served as National Security Advisor for US President Richard Nixon, he had been a talented professor at Harvard University, where he had been granted tenure at an early age. After leaving the Department of State, he wished to return to Harvard and applied for his former tenured position. Based on his distinguished performance, Harvard decided to re-admit him to the faculty even though he had left the University for many years and despite its requirement that professors could only take leave for a maximum of two years. But Kissinger set out one condition — that he wanted to be fully occupied as a researcher. Because of this, the University administration unanimously opposed his reappointment.

Harvard is often considered a research-oriented university, but in reality no universities function  solely as research or teaching institutions since both must be integrated. Research is indispensable in order to achieve anything, not only at a university but in other fields as well, including cooking. In fact, Professor Kuo has gained some fame in the culinary arts and was renowned for his specialty, a hot and sour soup. He has not only published his recipe for this soup in the World Journal, but at a CityU auction succeeded in raising $100,000 for his dish. The key to this delicious dish, Professor Kuo says, is his dedication to researching the physics of cooking soup. 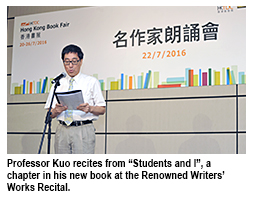 Teaching and research can be compared to cooking. “Teaching is empty without devotion of the heart. When you are devoted, your teaching will definitely be good and effective. I am devoted to research, just like I do in cooking in which I developed an interest at a very young age. That is why I got the inspiration to prepare a great hot and sour soup. We must be equipped with sufficient software, hardware and funding before we can manage a university, but these are not good enough.”

That’s because proper soulware is lacking, Professor Kuo explained. If we want to catch up with the West in higher education, we must devote our heart and soul. One of the reasons why CityU has made impressive results in the global rankings is a consequence of the University’s recruitment policy, under which the University recruits faculty in the American way. But in the cross-strait higher education universities, employers often adopt an attitude of superiority.

Education is a fairly complicated issue, and there is a gap between knowledge and degrees and knowledge and achievement, according to Professor Kuo. To fill this gap, he says, we should devote our heart to integrate teaching and research.

After finishing the speech, Professor Kuo attended the Renowned Writers’ Works Recital, one of the events of the book fair, where he recited a chapter titled “Students and I” from his new book about a CityU student who studied hard while fighting an illness.  The story was so moving that some audience members were moved to tears. 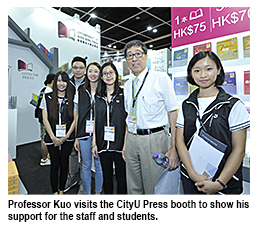 Professor Kuo then visited the CityU Press booth for the ninth year in a row to show his support for the staff and students. He also discussed his experiences in learning and publishing with the interns and expressed interest in several new titles published by the press.