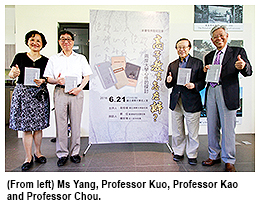 The integration of teaching and research, and the separation of politics and education, are two major keys to successful higher education, says Professor Way Kuo, President of City University of Hong Kong (CityU).
He was speaking at a seminar on 21 June with Ms Yang Shih-ruey, Principal of Taipei First Girls High School, on the topic of “How to develop higher education”. He had been invited to speak at the seminar by National Tsing Hua University in Taiwan (Tsing Hua).
Professor Kuo was the perfect speaker for the topic, according to Professor Chou Hwai-pwu, facilitator of the seminar and Senior Vice-President of Tsing Hua, because CityU had been gaining increasing international recognition under Professor Kuo’s leadership. 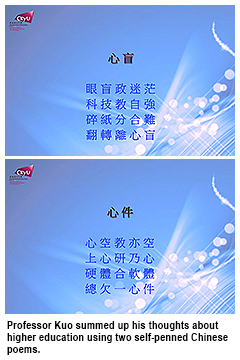 Through two self-penned poems Blind Soul and Soulware, the CityU President summed up his thoughts about higher education, i.e., the integration of teaching and research, and the separation of education and politics.
He said a higher education institute could only become successful by developing soulware even if it already possessed adequate hardware and software. Also, good teachers should work hard on research, and integrate their findings into their teaching.
He also spoke about how mixing politics with education can hamper innovation; and that  separating education from politics could provide the momentum for social advancement. By way of example, he spoke of how he had seen an interesting activity in which highly knowledgeable scholars had failed to put together a piece of paper that had been cut into smaller pieces. Yet a child had completed the task in just a minute!
“The child was very focused on the task, undisturbed by other matters, and he quickly spotted that on the back of the bits of paper was what looked like a map. He used the map as a guide and was able to rapidly solve the puzzle!” Professor Kuo said.
When discussing the topic of internationalisation, Professor Kuo stressed that understanding how other people worked was as important as learning the language of the host country. “That’s why CityU provides overseas exchange opportunities to half of its students during their studies. We want them to have chance to learn from people in other parts of the world,” he said.
Ms Yang fully agreed that the focus of internationalisation should be the exchange of ideas and interaction between people. Her school recently ran an experiential activity at a Japanese farm that enabled her and her students to directly understand Japanese farmers’ conscientious attitude to work. She believed that this approach should actually be the true meaning of an exchange.
On the issue of college degrees, Professor Kuo expressed that an academic degree did not necessarily mean that the holder had knowledge, and that the mission of education was to reduce the gap between the two.
Ms Yang concurred. She said that she had stated clearly in a parent sharing session at her school that high school was not a tutorial school. Students in high schools did not only prepare for examinations; they learned other equally important things, too, she said. 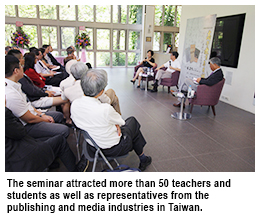 During the Q&A, Chen Shao-chieh, a student taking the Joint Bachelor's Degree Programme between CityU and National Taiwan University, told the audience that he had experienced the diversity of learning opportunities provided by CityU when he was on short-term study or exchanges in Hong Kong, Japan and Taiwan. When he asked for advice on further studies and career development, Professor Kuo told him that all he needed to do was to follow his heart and he would be successful.
Mr Chou An-ping, a CityU alumnus in Taiwan, said CityU had provided him with the opportunity to study in the UK and the US, an experience that had broadened his vision, enabled him to understand himself, and establish a new set of values.
The seminar was part of the launch ceremony for Professor Kuo’s new book The Soulware of Higher Education. Professor Charles H.C. Kao, founder of the Global Views–Commonwealth Publishing Group, was invited to give the opening remarks at the launch ceremony. The royalties generated from Professor Kuo’s new book will be donated to Tsing Hua for student scholarships.