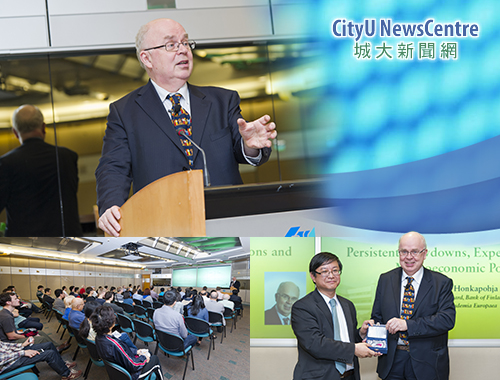 ​
Pessimistic expectations lead to demand deficiency and persistent slowdown even without a financial crisis, according to a Finnish banker at City University of Hong Kong (CityU) on 21 April.
Unconventional and effective monetary and fiscal policies are remedies to such economic stagnation. A temporary fiscal stimulus, appropriately tailored in magnitude and duration, can be effective in recovering from persistent slowdowns, said Dr Seppo Honkapohja, a member of the Board of the Bank of Finland, at the latest installment of the CityU Distinguished Lecture Series.
The lecture was titled “Persistent Slowdowns, Expectations and Macroeconomic Policy”.
Dr Honkapohja argued that monetary policy regimes based on interest rate setting using a Taylor rule might lead to persistent slowdowns after large negative shocks to economic activity and expectations. Recent research has focused on possible remedies to such possibilities via macroeconomic policies.
With zero interest-rate policy, several central banks introduced asset purchase programmes, macroeconomic policies that could be effective in easing economic stagnation, the speaker said.
Dr Honkapohja, who joined the Bank of Finland in 2008, is responsible for scientific research, currency supply, risk control of investment activities and monetary policy. He was Professor of International Macroeconomics at the University of Cambridge from 2004 to 2007. His publications in English include over 80 articles in refereed journals, and he has authored or edited 18 books.