Gold and silver for innovative technologies

​The cross-discipline collaboration and innovative ideas of two teams formed by students from different departments at City University of Hong Kong (CityU) earned them gold and silver awards, respectively, in the “JOS Innovative IT Project Awards 2015-2016”.

The mobile app developed by the gold-winning team, which beat more than 40 others to enter the final eight, provides an effective solution for queuing problems at restaurants.

The “self-transformable wheelchair” created by the silver-winning team helps people with physical disabilities to get in and out vehicles with less difficulty. 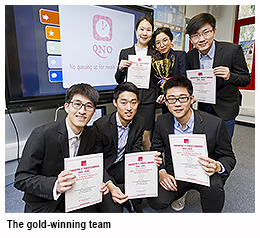 Dai Peng, the team leader, said long queues outside restaurants were frequent in Hong Kong despite ticket systems during meal times. Not enough restaurants had effective mobile apps to solve this problem.

“The app enables customers to get time tickets from different eateries and lets restaurants promote their food and services. The app tells you the wait time and ticket numbers. You get a reminder when it is almost your turn,” said Dai Peng.

“Our app QNO provides a more convenient platform for restaurants and customers,” he added, emphasising that his team’s app solved business problems through technology and would prove useful to customers in large shopping malls. 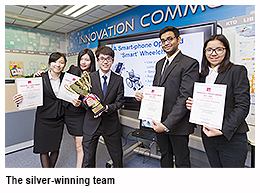 They developed a self-transformable wheelchair that users operate and control via an app to move upward or forward as well as to turn left or right.

“I once saw a person with disabilities finding it hard to get into a taxi, but the driver didn’t help. Seeing this made me think about developing a wheelchair that can allow users to get in and out of vehicles by themselves,” said Lam Wah-shing, the team leader, who said he found his knowledge of mechanical and electronic engineering invaluable when working on the project.

He pointed out that electric-powered wheelchairs could cost several hundred thousand dollars, whereas conventional wheelchairs were much cheaper, only $2,000 to $3,000, but they were not always user-friendly.

He hoped to offer an alternative between these two types. As the self-transformable wheelchair can be made by modifying a conventional wheelchair, it was much cheaper than an electric-powered one.

The competition, organised by Jardine OneSolution (HK) Limited (JOS), aims to encourage students at tertiary institutions to apply technology and innovative ideas to contribute to the advancement of different sectors such as retail, construction, public utilities and transportation.

The prizes for the gold-winning team and the silver-winning team were HK$30,000 and HK$15,000, respectively, plus a trophy for each of the teams and certificates for all team members.