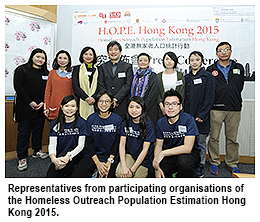 The number of homeless people staying in 24-hour fast-food shops overnight has increased by well over 400% compared to 2013, according to the Homeless Outreach Population Estimation (HOPE Hong Kong 2015), organised by City University of Hong Kong (CityU), together with groups from four other universities and four community partners. Unaffordable rent was the most commonly reported reason for local homelessness.
The HOPE Hong Kong 2015 survey was conducted on the night of 29 October 2015. The survey found there were 1,614 street sleepers without a stable or permanent home, an increase of 14% over the previous year when the first street count was carried out. The worsening situation reflects the urgency of the street sleeper problem and demands more concern from both the government and the public.
Half of the 641 homeless respondents reported unaffordable private market rent left them with no alternative but to make the street their home. The average rent of their last flat was about $2,000, which accounted for nearly 35% of their monthly income on average, imposing a heavy financial burden on them. In addition, 216 respondents (33.8%) said they could not find accommodation with affordable rent and had been forced to move in the past two years before they became street sleepers.
The report found that there were 256 homeless people staying in 24-hour fast-food shops overnight compared to 57 in August 2013, an increase of over 400%. Out of 55 respondents, 56% said they were receiving Comprehensive Social Security Assistance (CSSA), or living on savings, or assistance from friends or community organisations, or scavenging. The other 44% said they had jobs. And 40% said they could not find accommodation with affordable rent, so they had to stay in fast-food shops overnight.
The count was organised by CityU’s City-Youth Empowerment Project (CYEP), together with groups from four other universities and four community partners: Christian Concern For The Homeless Association, the Salvation Army, the Society for Community Organization, St. James’ Settlement, Chinese University of Hong Kong (CUHK), The University of Hong Kong, Lingnan University and Hong Kong Polytechnic University. 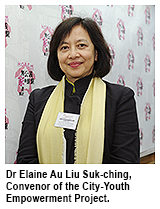 Over 300 students participated in the city-wide homeless street count, along with volunteers from other universities and community organisations, after attending a series of training workshops on skills for interviewing the homeless, said Dr Elaine Au Liu Suk-ching, Convenor of the CYEP and Associate Professor in the Department of Applied Social Sciences. On the night of the street count, volunteers visited 240 locations, including underneath flyovers, and in park pavilions, wharves and 24-hour fast-food shops.
The inter-university and organisation street count won support from the University Grants Committee, added Dr Au. “The street count indicates that there is an increasing trend in homelessness in Hong Kong, and we hope our survey can help raise student and public awareness of the problem. We would like to thank the community organisations, universities and volunteers for their support and participation,” she said.
Based on the findings of the survey, there has been an increase in the number of homeless people because of high rents or bad conditions in places that are more affordable, said Dr Wong Hung, Associate Professor of Department of Social Work in CUHK. He added that even though some people had jobs, they were unable to find affordable accommodation and had to sleep in the street or stay in 24-hour fast-food shops overnight. 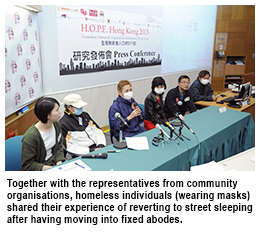 Fifteen percent of respondents reported the reason that they became street sleepers was a poor living environment, resulting in discomfort caused by fleas and lice. Approximately 25% of respondents said that they had tried to find rented accommodation, but failed because of the hot or overcrowded living conditions, and therefore they gave up looking for a place to live and went back to the street, Dr Wong added.
The government must face this serious problem and take measures to tackle it, said the four community organisations that provide services to street sleepers. Such measures could include, for example, providing lower- to middle-priced rental accommodation in the downtown areas, and making rehousing arrangements for long-term street sleepers under the Compassionate Rehousing Scheme.
Other proposals from the four organisations include:
1.     Adjusting the CSSA rent allowance to reflect current rental costs;
2.     Increasing the public housing quota and supply for single persons and
reviewing the allocation system of public rental housing for single
persons; and
3.     Extending the hostel service for the homeless.