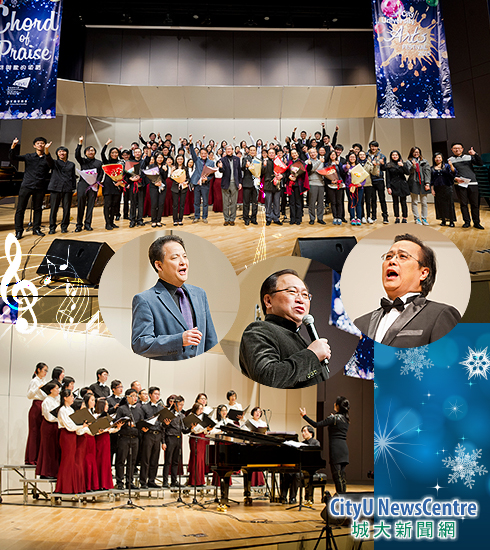 ​To encourage students to pursue musical interests outside their studies and foster all-round development, and to enrich the arts and cultural ambience on campus, a Christmas Concert titled “Chord of Praise” was held in Wong Cheung Lo Hui Yuet Hall on 18 December, ending the year on a beautiful note for the audience of around 400.
In addition to classics such as Beethoven’s 4th Symphony, performed by the CityU Philharmonic Orchestra, the programme included popular music, songs and carols, performed by the CityU Chinese Orchestra, the CityU Concert Singers, and the CityU SU Christian Choir. External performers included narrator Mr Zhang Miaoyang, the iconic voice artist at Phoenix Satellite Television Company Limited; and Mr Petrus Cheung, a famous baritone and one of the most prominent vocal performers in Hong Kong.
To share the happiness of Christmas, students from nearby secondary schools and 35 members and volunteers from the Hong Kong Federation of The Blind were invited to the Christmas Concert.
Chord of Praise was the final concert in a series of musical performances held during the semester. “Music can connect people,” says Dr Wong Chi-tim, Director of Student Development Services, and a trained tenor in his own right. Dr Wong performed several arias in the concert, including the evergreen Non ti scordar di me.
The CityU Concert Singers performed five songs at the concert this year, two in Chinese – Tree of Love and Cupid Suite – and three in English – Irish Blessing, The Lily and the Rose and A Holiday Wish.