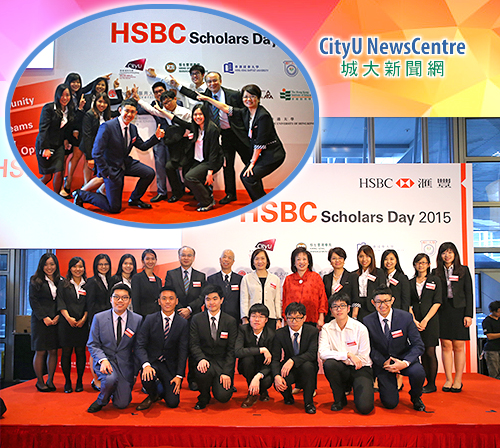 Twenty-three students at City University of Hong Kong (CityU) have been awarded over HK$1.6 million scholarships in recognition of their outstanding achievements.

The HSBC Overseas Scholarships will allow Poon Kathleen Hei-tung, a Year 3 student majoring in law, to study at the University of Oxford from October for a year.

“I am very grateful to CityU for providing a lot of resources for our participation in mooting competitions, summer courses and mentoring scheme,” she said.

“The programme at Oxford will be quite demanding. I will regard it as a challenge. I will also take this opportunity to build a stronger foundation in the law and make more friends,” she added.

Chan Tsz-chung, a Year 2 student from the School of Energy and Environment, will be sponsored by the Innovation and Technology Scholarship Award to study overseas for six months starting in January.

“I wish to be an energy engineer and make contributions to a number of fields, including energy conversion, bioenergy, water quality and building energy management,” he said.

Passionate about the environmental issue since secondary school, Tsz-chung has enriched his university life through various kinds of activities such as the City-Youth Empowerment Project, summer internships and an overseas study tour.

The awardees celebrated their achievements at the HSBC Scholars Day held at the HSBC Main Building earlier.