​Around 70 members of the Research Grants Council (RGC) learned about the overall research activities, research strategies and major achievements of City University of Hong Kong (CityU) during a visit on 18 June. 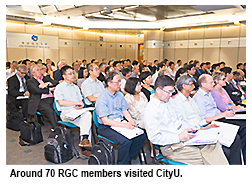 The delegation, led by RGC Chairman Professor Benjamin Wah Wan-sang, comprised RGC members and panelists for the five subject areas under RGC, namely, the Biology and Medicine Panel, the Business Studies Panel, the Engineering Panel, the Humanities and Social Sciences Panel, and the Physical Sciences Panel.

They were warmly welcomed by Professor Arthur Ellis, CityU Provost; Professor Lu Jian, CityU Vice-President (Research and Technology), whose office arranged the visit; and other members of the senior management team.

Professor Ellis presented the latest developments of the University to the delegation. 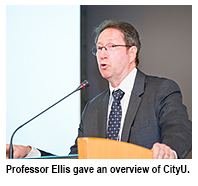 Professor Ellis pointed out that CityU had also performed strongly in the recent assessment of research outputs of UGC-funded universities.

“In the Research Assessment Exercise 2014, CityU has about 44% of its submissions meeting the standard of 4-star (world-leading) or 3-star (internationally excellent), and our University ranked first in Building Technology, Chemical Engineering, Civil Engineering, Communications & Media Studies, Materials Science, Mathematics & Statistics among the UGC-funded institutions,” he explained.

Professor Ellis added that in 2014–2015, CityU ranked third in the total number of RGC General Research Fund (GRF) and Early Career Scheme (ECS) awards; and in the past three years, CityU ranked first or was tied for first in the number of ECS awards. 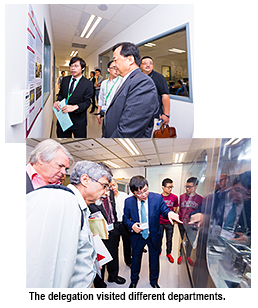 In addition, he explained to RGC members the goal of the Discovery-enriched Curriculum (DEC) and cited examples of CityU students and alumni winning top prizes in international competitions to illustrate how the DEC and CityU staff helped students nurture their ability to discover and innovate.

The RGC members raised a number of questions about CityU, including the internationalisation of faculty and students, the progress of the School of Veterinary Medicine, and future research strategies that were addressed by Professor Ellis and Professor Lu.

After the overview, the delegation was divided into groups to visit different academic units and research centres. They were shown the research facilities and equipment, project highlights, and important research outputs in eight areas: biomedical engineering and materials; built environment; business and management; digital society; electronic engineering; energy and environment: smart city; life and environmental sciences; and physical sciences.

In addition, discussions between the RGC members and CityU academic staff and research students were held, followed by a debriefing by Professor Wah for the senior management team.