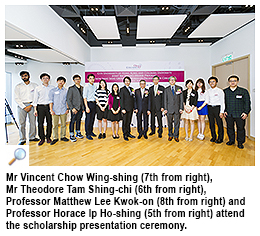 Mr Theodore Tam Shing-chi, Chief Financial Officer of Chow Sang Sang Holdings International Ltd, congratulated the scholarship recipients and thanked CityU for giving the company the opportunity to invest in the education and our future together.

“Our corporate philosophy is ‘Sustained vitality, ever rejuvenated’. As a chosen one, you are about to embark on your journey. We believe that you will shine and bring more blessings to the others like a piece of fine jewelry,” he said.

Professor Matthew Lee Kwok-on, Vice-President (Development and External Relations), said Chow Sang Sang Holdings International Ltd had offered scholarships to a total of 22 students since the programme was launched in 2012.

He said he was very grateful for the company’s generous support for education because it allowed students to fully devote themselves to their academic studies without worrying about financial pressures. 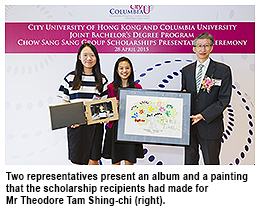 To express their gratitude to the company, the 12 scholarship recipients presented an album and a painting that they had made to Mr Tam at the ceremony. The painting was of a tall tree with thriving green leaves and an inscription of a Chinese idiom: “A decade is enough to start afforestation; a century is needed to promote education.”

Four students have graduated from the CityU–Columbia University Joint Bachelor’s Degree Program since it was launched in 2012.

Students admitted to the Joint Bachelor’s Degree Program earn a bachelor’s degree from both CityU and Columbia University. Students complete the first two years of their studies at CityU and second two years at Columbia University fulfilling all of the requirements of both institutions. Additional programme details are available at: http://gs.columbia.edu/cityu-hk/.

Students from Hong Kong, the mainland and overseas countries have been admitted to the programme.

Gigi Yan Ying-fong, a Year 3 psychology student from the Department of Applied Social Sciences, said she hoped to expand her academic knowledge by studying courses offered by the two universities.

Gopinath Rudra, a Year 3 student from the Department of Computer Science, said he was excited about enrolling in the programme. “I have been longing to study at Columbia University, while CityU has offered me a rich learning experience. It is a valuable opportunity for me,” he said.

“The Joint Bachelor’s Degree Program between Columbia University and City University of Hong Kong represents a truly important partnership in international undergraduate education. Because these students combine the academic rigor of two world-class universities in their academic programmes, they contribute immensely to the student experience on campus and to the intellectual conversation in the classroom,” Professor Peter J. Awn, Dean of Columbia University School of General Studies, said.