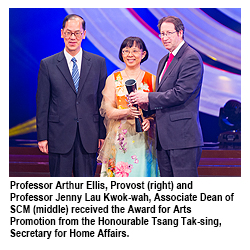 It was a huge night for the arts at City University of Hong Kong (CityU) when we took home three major prizes at one of Hong Kong’s most prestigious arts and culture events.

The event was an excellent opportunity for CityU, and in particular the School of Creative Media (SCM), to promote the professional education and arts research that is such a vital part of our Discovery-enriched Curriculum to the local arts scene and the public in general. 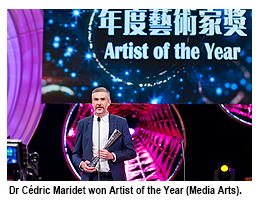 “These awards show the appreciation among the local community for CityU’s efforts over the years in arts promotions and media arts, and serve as a catalyst for future arts and cultural endeavours,” said Professor Jeffrey Shaw, Dean of SCM.

“CityU—Year of Art and Culture” in 2014 paid tribute to Hong Kong’s creative and media arts by promoting a host of genres from photography, music, animation, video to visual arts and literature.

Dr Maridet received his PhD in Media Arts in 2009 from CityU, where he teaches, explores the various facets of sound through video, installations, photography, composition and text creation. 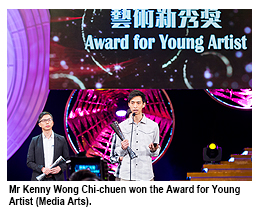 Mr Wong, who also teaches in SCM, was recognised for his work on exploring visual patterns, perceptual states and sound textures to create new spatial experiences.

CityU was certainly in good company at the event. Legendary figures from the local cultural scene were in abundance including the highly respected writer Liu Yichang who received a Life Achievement Award and the noted film director Tsui Hark who won the Award for Outstanding Contribution in Arts.

There were also awards to grassroots associations for people with disabilities and a host of awards for schools.