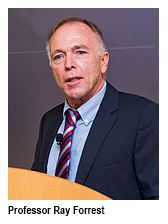 The talk by Professor Ray Forrest, Chair Professor and Head of the Department of Public Policy, at the latest of the President's Lecture Series: Excellence in Academia proved timely as housing is a hot topic in Hong Kong. It was no wonder that the lecture titled “Equity and Inequity: Exploring Urban Residential Wealth” attracted a packed house.
The main point of the talk, held on 22 April, was to explore how we should understand the social, economic and political dimensions of developments in urban residential wealth.
One striking point was that while there have been many winners in the global increase in residential wealth, there have been losers, too.
“Growth and the spread of residential wealth has improved the material well-being of significant numbers across a wide range of societies,” Professor Forrest said. “But as residential wealth and an urban middle class have expanded, wealth has also become more concentrated.” 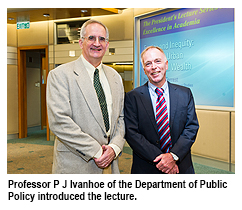 He pointed out that between 2000 and 2005 the total value of residential property in OECD economies rose by more than $30 trillion to over $70 trillion, but conversely that residential property was deeply implicated in financial crises, particularly over mortgage issues in 2007 in the US.
Professor Forrest revealed how a number of sociological factors come into play when considering housing wealth. For example, a greater proportion of a family’s wealth is now tied to property than ever before, which raises major issues related to inheritance, family size and “broader impacts in society”.
One acute problem is longevity, Professor Forrest said, since people were living longer and thus parents were not passing on “nest eggs” to their children as quickly as anticipated, leaving some sons and daughters in a financial predicament.
Other related issues run along gender lines since fewer women than men add their names to title deeds, which potentially could shut them out of residential wealth as years go by. Another issue is falling home ownership among younger people.
The takeaway from the talk for anyone who had previously considered urban residential wealth as simply a matter of the value of your flat rising over time was that there are a number of sociological variables at play that deeply affect every strata of society.
The fact that whereas in the early 20th century housing assets were mainly owned by private landlords, and 100 years later they are owned mainly by private households represents a fundamental shift in the way society operates.