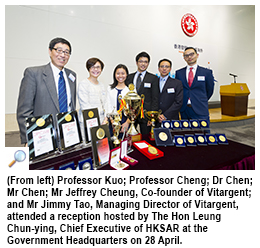 A biotechnology company founded by Mr Eric Chen Zixiang and Dr Chen Xueping, both alumni of City University of Hong Kong (CityU), has been awarded the Grand Prix at the 43rd Geneva International Exhibition of Inventions.
The company, Vitargent (International) Biotechnology Limited, won the award for the application of technology developed by Professor Cheng Shuk Han from the Department of Biomedical Sciences at CityU and her research team.
The technology helps to improve the safety of food and daily necessities by rapidly testing for toxins through the use of zebrafish embryos with results available in 48 to 72 hours. It is commended for allowing in vivo detection of toxins without having to use animals, which can simultaneously study over 1,000 toxins, plus the toxicological mechanics of the samples studied, for food, medicine, plastic products, cosmetics, and water, among others. 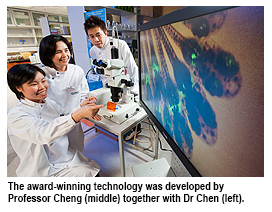 The Geneva International Exhibition of Inventions, considered the world’s oldest and largest invention show, was organised annually by the Swiss government and the World Intellectual Property Organisation. This year, around 1,000 inventions developed by 750 companies and institutions from 48 countries were exhibited.
“We are very encouraged that the entrepreneurial success of Mr Chen and Dr Chen, together with the research achievements of Professor Cheng and her team, has won international recognition,” said Professor Way Kuo, CityU President. 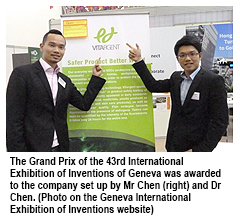 “The award is proof that CityU’s commitment to the development of research and innovation, as well as the promotion of entrepreneurship to benefit society, has gained wide recognition,” he said.
Professor Kuo added that CityU’s firmly established strategic development would enable the University to continue its pursuit of excellence in problem-based research and professional education; conduct further interdisciplinary research; and nurture talent. 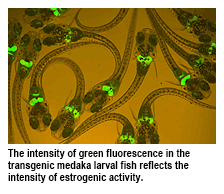 Mr Chen graduated with a Bachelor of Engineering in e-Logistics and Technology Management from CityU in 2010. During his studies, he developed business proposals with his classmates based on technology that uses transgenic medaka for detecting toxins and won numerous local and overseas entrepreneurship contests. CityU later granted the patent for this technology to Mr Chen, who then founded Vitargent with Dr Chen, which has become an incubator company on the “Incu-Bio Programme” at Hong Kong Science & Technology Parks.
Vitargent provides local and overseas companies with services for toxicology testing using transgenic medaka and zebrafish. The technology is used by government departments and academic research institutions in Hong Kong, mainland China and Europe, as well as multinational cosmetics and food groups, significantly enhancing the safety of food and daily necessities.
150420-4_Geneva_L.jpg