Professor Kuo also led a delegation to Tsinghua University (THU) for discussions with the Chairman of the University Council, Professor Chen Xu. Topics included strengthening the CityU School of Veterinary Medicine, a partnership with Cornell University, by adding THU as an affiliating institution in the Shenzhen initiative; and developing a CityU-THU collaboration on the restoration of the Book of Etiquette and Ceremonial. Professor Kuo also attended the Worldwide Search for Talent in Beijing on 17 March.

CityU partners with around 300 higher institutions in 37 countries and locations and provides more than 370 overseas exchange programmes for students. “CityU is an internationalised university that focuses on professional education, with an emphasis on multi-disciplinary and cross-cultural learning for students to expand their horizons. We have already increased the percentage of students participating in overseas exchange programmes to nearly 50%. Exchanges with top universities in China including PKU and THU will definitely advance the development of these universities further,” Professor Kuo said. 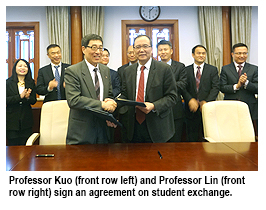 Under the exchange agreement, CityU and PKU will each send 10 students to the other university to study for a semester. Currently, CityU’s School of Creative Media and Department of Information Systems have exchange programmes with PKU’s School of Arts and Department of Information Management to promote cultural exchange between students of the two universities.

Professor Kuo said, “PKU has nurtured numerous well-known figures who are influential in China and all over the world. I believe this agreement with PKU will promote exchanges between the two universities, as well as encourage students from both institutions to gain a deeper understanding of learning in the modern world.”

In addition, Professor Kuo was invited by PKU to deliver a keynote speech titled “Critical Reflections on Nuclear and Renewable Energy”, elaborating on the need to balance such goals as environmental protection, economic well-being, reliability and sustainability in a reasonable manner when considering energy supply. 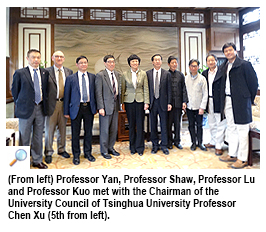 On the same day Professor Kuo and the Chairman of the THU Council Professor Chen Xu discussed research work on the restoration of the Book of Etiquette and Ceremonial and modern daily rituals, as well as strengthening the CityU School of Veterinary Medicine, a partnership with Cornell University, by adding THU as an affiliating institution in the Shenzhen initiative. Professor Jeffrey Shaw, Dean of the School of Creative Media at CityU, will be in charge of the sub-topics of the restoration research project on the Book of Etiquette and Ceremonial.

“The Book of Etiquette and Ceremonial is the origin of rituals, and also one of the main classics of traditional studies. CityU’s School of Creative Media will be able to make use of its advantage in combining art and technology, and present a traditional classic in an innovative way,” said Professor Kuo.

CityU collaborated with Cornell University in the US and established the School of Veterinary Medicine in March 2014, the first such school in Hong Kong. The School is progressing well and has started enrolling doctoral students, while experimental farms and large-scale laboratories are being set up. The visit to THU is timely to discuss further collaboration between CityU and THU. 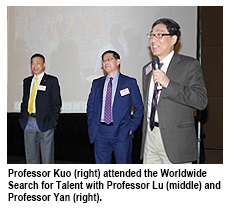 CityU held the Worldwide Search for Talent, a distinguished scholar’s recruitment talk, in Beijing on 17 March. More than 50 Chinese and foreign scholars from top universities in China such as Peking University, Tsinghua University and Renmin University of China attended the event. Professor Kuo, CityU’s Vice-President (Research and Technology) Professor Lu Jian and CityU’s Dean of the College of Business Professor Yan Houmin presented CityU’s latest developments to scholars on the occasion.

CityU aspires to become a global university that excels in research and professional education. The purpose of the recruitment event is to attract distinguished international scholars who will further enhance the strengths of CityU. All teaching and research positions are welcomed, including chair professors, professors, associate professors and assistant professors.

Distinguished scholars recruitment talks have been held in Washington DC, Los Angeles, San Francisco, Paris and Tokyo, and more will be held globally.