Nuclear science and engineering in a sustainable world 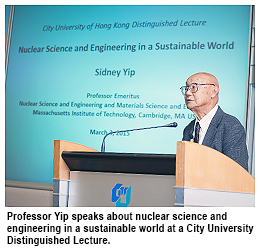 In 1949, a teenage Professor Sidney Yip stood overlooking Victoria Harbour in Hong Kong waiting with his parents to board a boat bound for the US. More than 65 years later, the distinguished nuclear scientist was back in Hong Kong to give a City University Distinguished Lecture at City University of Hong Kong (CityU).
“It is a great honour for me to give this talk to you today about the global enterprise of nuclear science and engineering,” said Professor Yip, Professor Emeritus, Department of Nuclear Science and Engineering at Massachusetts Institute of Technology (MIT), US.
In his talk on 3 March, titled “Nuclear Science and Engineering in a Sustainable World”, Professor Yip, who has been a faculty member at MIT for more than 50 years, analysed two views within the field: the capacity, drive and policies of the US and China, and universities potential contribution to that development.
“Nuclear power presents the most vexing technology challenge facing society,” Professor Yip said. “It offers unique benefits, but also the possibility of widespread harm.”
The early promise that nuclear energy appeared to deliver between the 1950s and 1980s was soured later on by three nuclear accidents, he said, citing Three-Mile Island (1979), Chernobyl (1986) and Fukushima (2011). These accidents had contributed to what Professor Yip described as “partial resistance” to nuclear energy today.
The problem for the US, according to Professor Yip, is that the US cannot expect to lead in the world development for nuclear energy and associated measures for nuclear security without a robust domestic capability for nuclear generation. 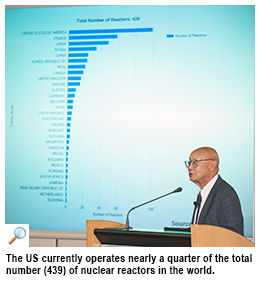 Recent data suggested that the US’s regional share of nuclear generating capacity would decline by 2030, while the regional share in Asia was likely to soar, he said.
“A national policy on nuclear energy supply and nuclear security measures seems imperative,” he argued.
Universities had a role to play invigorating and contributing to nuclear policy, he added. For example, the MIT Strategic Plan 2010 set out a clear goal to develop the next generation of technical leaders and provide technical leadership in energy and non-energy applications of nuclear technology, Professor Yip said.
There was a clear incentive to “inform public debates on the wise use of nuclear science and technology”, he said.
MIT had the academic freedom to formulate its Strategic Plan, but the US government did not have the same level of freedom to set national policy for nuclear science and technology.
“The complex issues of nuclear power sustainability involve domestic concerns and international politics, which often are not compatible,” he said.
“Thus the formulation of an effective US national policy for nuclear power has to deal with instabilities and uncertainties, which academic institutions do not have to confront,” he said.