In celebration with iGEM team for their success 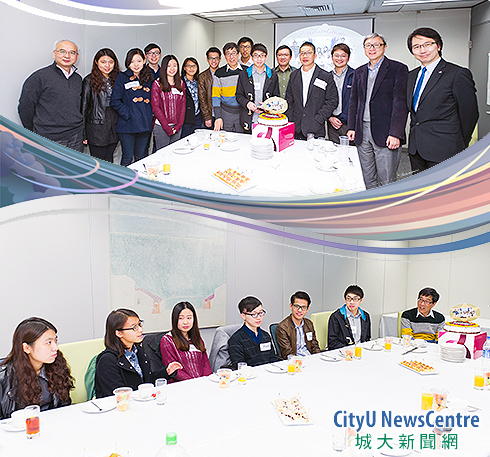 At a reception held on 5 January, Professor Way Kuo, President of City University of Hong Kong (CityU), and members of the senior management celebrated the success of a CityU student team that won a gold medal at the International Genetically Engineered Machine (iGEM) Giant Jamboree Competition 2014 in Boston, US.
Professor Kuo congratulated the team for its outstanding achievements in the international competition and encouraged the students to continue their research.
Among the attendees were Professor Horace Ip Ho-shing, Vice-President (Student Affairs); Professor Matthew Lee Kwok-on, Director of Communications and Public Relations and University Spokesperson; Dr Raymond Chan Kwok-hong, Dean of Students; the principal advisor for the iGEM team, Dr Richard Kong Yuen-chong, Associate Professor in the Department of Biology and Chemistry (BCH); Dr David Chiu Sung-kay and Dr Terrence Lau Chi-kong, both assistant professors in the Department of Biomedical Sciences and advisors for the team.
The iGEM team comprising 12 students from BCH and the Department of Mechanical and Biomedical Engineering (MBE) competed with over 2,500 participants from 245 universities across 32 countries to win the top award.
The students tackled obesity by creating a new biological system called “Fit Coli”, which is genetically modified Escherichia coli (E. coli).
Fit Coli can absorb excess fatty acids at a level of absorption six times higher than for non-modified E. coli. Fatty acids can then be turned into α-linolenic acid, known as ALA, which can further convert into docosahexaenoic acid, known as DHA, an omega-3-fatty acid that is beneficial for health.