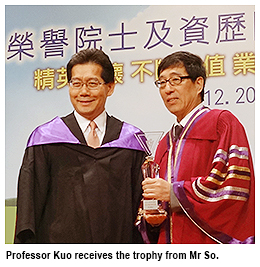 The award was presented by Mr Gregory So Kam-leung, Secretary for Commerce and Economic Development, the officiating guest at the award presentation held at Hong Kong Polytechnic University on 8 December.

The Outstanding Achievement Award is presented to distinguished persons in recognition of the significant achievements and contribution in their fields. Professor Kuo has been honoured for his contributions to designing the reliability of electronics systems and nuclear energy, and also for promoting the curriculum of relevance to societal needs and problem-oriented research.

Professor Kuo was chosen unanimously as a winner of the Award, said Mr Tam Jo-tak, Chairman of the organising committee for the award presentation ceremony. 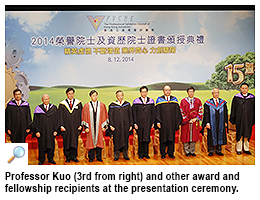 “We used to talk about national reconstruction by means of science,” said Professor Kuo in his acceptance speech. “But in fact, science lays the foundations only; we still need industry to complete the reconstruction. Everyone here contributes to the betterment of Hong Kong, mainland China, and the world by developing in industry. I am pleased to share the honour with you.”

In his speech, Professor Kuo also talked about work attitude. He suggested that the saying “try to do something” is incorrect. “You either do it or don’t do it,” he said.

A pioneer in reliability research for systems at their infant stage, Professor Kuo is the author and co-author of several academic books, some of which are deemed classics in systems reliability and are used as the basis for establishing the reliability standards for electronics systems and products.

The other award recipient was Mr Wong Tit-shing, Chairman of Jetta Co., Ltd.  PVCHK also conferred Honorary Fellowships and Fellowships at the ceremony. Some CityU alumni have progressed to Fellow under the PVCHK Lifelong Learning Mechanism.

Founded in 1999, PVCHK aims to assist practitioners to attain professional qualifications and enhance their technical skills. The Award was first introduced in 2004 and had presented the accolades to Professor Charles Kao Kuen, Nobel Prize laureate in Physics, Professor Tsui Lap-chee, former President and Vice-Chancellor of the University of Hong Kong, Professor Paul Chu Ching-wu, former President of Hong Kong University of Science and Technology, and Dr Chiang Chen, the renowned Hong Kong industrialist.