Academician discusses the safety of radiation

Professor Pan Ziqiang, Academician of the Chinese Academy of Engineering, shared his views on nuclear safety in China at a lecture under the topic “Development of radiation safety” for the City University Distinguished Lecture Series on 25 September. 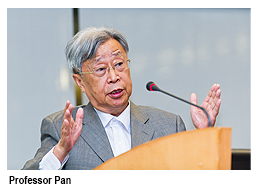 Professor Pan began by talking about research on the radiation effect. He said many people confuse nuclear safety with radiation safety, and said they cannot tell the difference between nuclear facilities, radiation facilities and a radiation lab.
At present, the United Nations Scientific Committee on the Effects of Atomic Radiation (UNSCEAR), the International Commission on Radiological Protection (ICRP) and the International Atomic Energy Agency (IAEA) actively monitor global radiation safety issues, and strive to minimise the effect of radiation on humans.
According to a UNSCEAR report published in 2001, evidence of the genetic effects of radiation exists only in animal experiments, and are not found in human yet. The assessment of the risk of cancer caused by radiation is also unsure.
Professor Pan said the main sources of radiation for most people included natural radiation, medical scanning, atmospheric testing, and nuclear cycle, among others. Data shows that the rate of human exposure to radiation through medical scanning has been increasing. This includes regular scans, such as CT scans and radiation therapy. 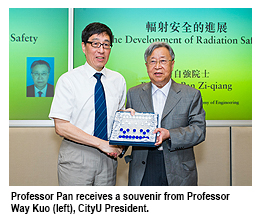 Most radiation that people experience comes from natural radiation. Data shows that an increase in indoor radon, a natural radiation gas, can cause lung cancer. Therefore society should be highly concerned, and strengthen regulations on using waste as building materials.
Professor Pan said the ICRP and the IAEA had issued new radiation safety standards in 2007 and 2011, respectively, with higher safety requirements for medical radiation. They have also urged governments to carry out programmes to control indoor radon.
Since the Fukushima nuclear incident in Japan in 2011, many people worry about safety issues in China’s nuclear power plants. Professor Pan said that the Fukushima incident occurred under specific circumstances, and despite the huge economic losses, the impact on people and other living organisms had been limited. In addition, tsunamis do not happen on the coastal areas in China
“The Fukushima incident cannot change the fact that nuclear power is safe and environmental friendly,” he said.
Professor Pan is currently the Director of the Science and Technology Committee of the China Nuclear Industry Group and Chairman of UNSCEAR. He was elected as an Academician of the Chinese Academy of Engineering in 1997, and was awarded the G. William Morgan Lectureship Award, which is the highest academic award of the American Health Physics Society, in 1996.