Eslite founder reflects on his faith in life 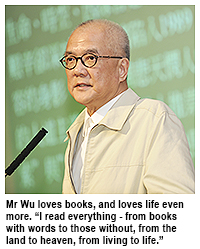 Mr Robert Wu Ching-yu, Founder and Chairman of Eslite Group, reflected on his life philosophy, the core values of his book retailer group at a talk at City University of Hong Kong (CityU) on September 24.

Mr Wu also shared with students the books on the humanities that had had an enormous impact on his life.

Founded 25 years ago, Eslite is a cultural landmark for Chinese readers. Its footprint spreads from Taiwan to Hong Kong and mainland China, and Mr Wu, its legendary founder, enjoys iconic status across the commercial and cultural sectors.

The founding, positioning, development and achievements of Eslite are closely connected to Mr Wu’s life experience and his pursuit for “the true, the good and the beautiful”. 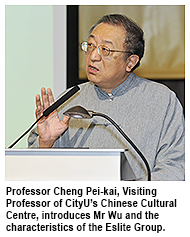 In his talk, titled “Sharing of the Eslite life experience”, Mr Wu talked about growing up, his childhood and his journey through life.

“Life is a mystery,” said Mr Wu, whose Confucian temperament, humble attitude and sincere words impressed the audience. “There are many things that cannot be planned or arranged.”

After graduating from Taipei Vocational College (now National Taipei University of Technology), Mr Wu worked as a salesman until he took over the company when he was 30 years old, having made a fortune in real estate.

Being young and successful did not make him conceited. “I felt guilty. I found that my fortune was not commensurate with my efforts,” he said in retrospect. “But I also received an unwanted gift from heaven.” Mr Wu suffered from congenital heart disease and had major operations in 2000 and 2006, respectively.

Following his early success and a life-threatening illness, Mr Wu began to contemplate the meaning of life by seeking answers in literature and philosophy, and he told the audience about the books that had helped to shape his values. He recommended authors such as the Chinese artist and monk, Hong Yi; the German writer, Hermann Hesse; the winner of the Nobel Peace Prize, Dr Albert Schweitzer; and Tibet’s spiritual leader, the Dalai Lama. 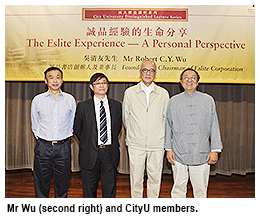 Mr Wu said that reading the same books at different stages in life has inspired him in different ways, allowing him to observe changes in life. He encouraged students to read more.

“People usually read what’s written inside books, but what’s more important is ‘you’ – your views and your responses at this moment, and understand yourself through reading,” he said.

For example, Mr Wu learned about zero-based budgeting when he was reading a management book at the age of 30. It was about an approach to budgeting that suggests that a company should not adjust its budget based on last year’s budget, but should start from zero, taking the latest business environment into account.

“At that time I thought, why don’t I also start my life from zero?” That led him to give up his successful career and began a career in the cultural industry.

Mr Wu admitted it is impossible to keep Eslite afloat only by selling books. Eslite was losing money for the first 15 years, he said, but he never thought about giving up.

“I believed that reading is an integral part of life, and I did not want to see bookstores disappear in the commercial world.” 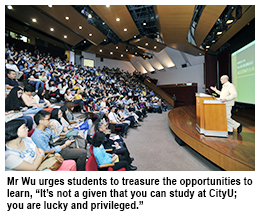 Meanwhile, he asked himself if he was capable enough or the service of Eslite was good enough to put the company’s finances in the black. He believes that brands are like people: what matters most is the core value. “There are 400 seats in Eslite’s Xinyi store. We could make a lot more money if that space is used for selling more merchandise, but our value is more important. We welcome readers to read all day here without buying.”

Mr Wu, frowning, could not hide his anxiety about the smart phone phenomenon and its possible side effects. He urged the young audience not to be led by too many useless messages which only wasted their time. The 65-year-old laughed and said he was outdated and would rather spend more time alone. “Human beings are the wisest of all, I have been reading my whole life and yet I still don’t understand myself. Should I really be spending time understanding external things?”

Finally, Mr Wu offered the Chinese character “sincerity”, hand-written by his father, to the students. The word has become his life-long motto and the foundation of Eslite.

“This is a word that has led through my whole life.”