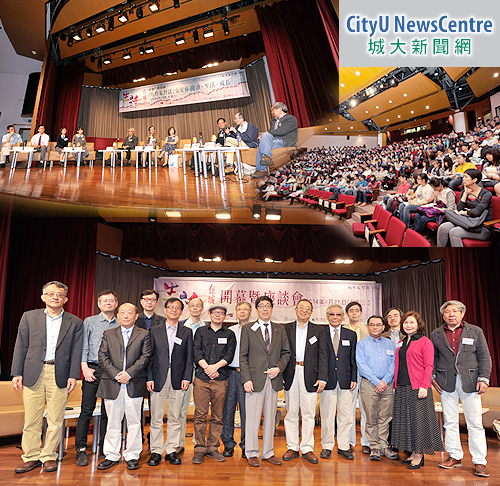 “City Living” was the theme for City Literary Festival 2014 at City University of Hong Kong (CityU) from 25 to 26 April.
The event was organised by the Cultural and Sports Committee, the Chinese Civilisation Centre (CCIV) and the Department of Chinese, Translation and Linguistics.
Some of the most influential novelists, essayists, poets and literary critics from mainland China, Hong Kong and Taiwan joined the festival: Professor Cheng Pei-kai, Visiting Professor at CCIV, Professor Bei Dao, Mr Li Rui, Ms Lily Hsueh, Mr Perry Lam, Professor Ji Jin, Professor Huang Ziping, Professor Chen Zishan, Mr Yip Fai, Mr Liu Wai-tong, Mr Yan Lianke, Professor Cheng Chou-yu and Professor Xu Zidong.
Professor Way Kuo, University President and the officiating guest at the opening ceremony on 25 April, said writing should not be limited by political background, age or sex.
The theme for this year’s festival reminded him that “A real hermit lives downtown; a real scholar cares about this world”, an antithetical couplet he wrote for CityU when he first took up the post of President.
He also encouraged those attending to devote themselves to an education that serves a real-life purpose and to make contributions to society.
Some of the guest speakers shared their insights about city living during the talk, which took place after the opening ceremony. As in past years, the dialogues between the guests and local audiences were divided into four genre groups, namely those of the essay, story, poetry, and cultural and art criticism, and were held in the afternoon.
A “Meet the Writer” session aimed at secondary school students and a workshop on writing poetry run by Mr Liu Wai-tong took place on 26 April.
The festival, which started in 2006, includes the City Literary Award Competition, talks by writers and critics, and dialogues between them and the audiences.