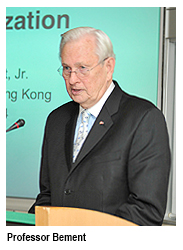 Higher education institutions are vital to promoting entrepreneurship, enhancing innovative ways of thinking and championing internationalisation, according to one of the most influential voices working in education in the US today.
Professor Arden L. Bement was making his claims based on his decades-long career as a scientist and engineer in academia and as part of the US government’s direct responses to the need for innovation and the phenomenon of globalisation in his capacity as Director of both the National Science Foundation (2004–2010) and National Institute of Standards and Technology (2001–2004).
“We live in a highly interconnected world,” said the David A. Ross Distinguished Professor Emeritus of Nuclear Engineering, and the Chief Global Affairs Officer Emeritus and Inaugural Director Emeritus at the Global Policy Research Institute, Purdue University.
“When one person catches a cold, the other sneezes,” he said. 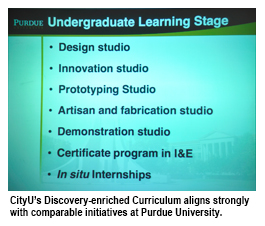 In response to current issues dominating global economics, politics and societies, such as sustainability, environmental destruction, scarcity of commodities, pandemics and hunger, we needed to look for multiple solutions through global collaborations, he said.
“We can’t stop globalisation,” he said, pointing out that the number of collaborations between US and Chinese universities had seen an exponential increase in recent years, especially in the co-authorship of refereed journal articles.
So why is innovation and entrepreneurship (I&E) so important under these circumstances, and can they be taught? For Professor Bement, who wrote the foreword for a recent book on energy by Professor Way Kuo, CityU’s President, I&E contributed to improving people’s lives throughout the world, in particular by harnessing the huge benefits of the technological revolution.
“And I&E can be taught,” he said, especially during times of crisis, citing examples from war and upheaval, such as the development of transport systems, rocket and missile technology and other technologies such as night vision.
So where do universities fit into the scheme of development for I&E? Professor Bement drew on his experience at Purdue University where I&E is fully integrated into the mindset of students, from the undergraduate and graduate level to promoting start-ups and business plan strategies. 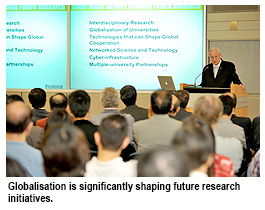 Included in a long list of achievements in this regard at Purdue were the creation of labs and other learning spaces specifically designed to allow students to pursue their own ideas and create new knowledge. Students are also offered graduate courses in entrepreneurship and training in writing grant proposals and business plans, with experienced faculty and alumni acting as mentors.
Another example for motivating students cited was the Burton D. Morgan Business Plan Competition at Purdue University which offers more than US$100,000 in prizes in total, and is now in its 25th year, and organised by Burton D. Morgan Center for Entrepreneurship at Purdue’s Discovery Park, a 160,000m2 interdisciplinary research park; another was a student managed venture fund that regularly saw an annual return of around 10%.
“Looking to the future, universities play a vital role strengthening, expanding and diversifying research links and R&D,” Professor Bement said. University faculty had a major gatekeeping role to play, too, he added, monitoring research and development around the world, finding out what works, what holds promise and what should be funded.
Asked why the US had maintained such an impressive trajectory over the years in I&E, Professor Bement said risk-taking was encouraged, and could take place because the US was a competitive, free and open society, where failure was not seen as loss of face but rather as a step in the right direction.
His talk aligned closely with the strategic direction that CityU has adopted in recent years following the implementation of its unique Discovery-enriched Curriculum, its emphasis on interdisciplinary projects such as the recent expedition to Antarctica, and the creation of labs, learning spaces and funding aimed at exposing CityU students to the rich processes behind discovery and innovation.