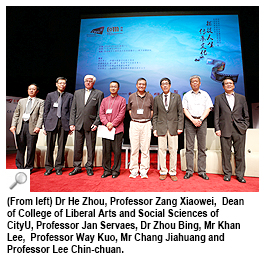 An opening ceremony for the launch of the Chinese Visual Communication Archives set up by the Department of Media and Communication (COM) was held at the Run Run Shaw Creative Media Centre of City University of Hong Kong (CityU) on 14 April. The Archives will serve as a treasure trove for the teaching and learning of Chinese documentaries.
The video documentaries in the Archives, up to more than 20,000 minutes of material spanning the centuries from the late Qing through to the Republic of China and the present day, come from the personal collection of Dr Zhou Bing, an influential documentary filmmaker in mainland China, who has built up the collection over the past few decades.
The Archives will provide primary sources for the teaching and research of visual communication and pave the way for COM to prosper as a major hub for the study of modern China’s politics, economy, culture and history.
Professor Way Kuo, CityU President, gave the welcoming remarks at the ceremony. The officiating guests included Dr Zhou Bing, Professor Jan Servaes, Head of COM, and Professor Lee Chin-chuan, Chair Professor of COM and the supervisor of the Archives. 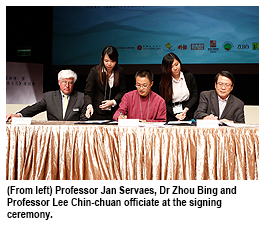 “We are thankful for the donation from Dr Zhou’s invaluable archives,” said Professor Kuo. “In this age of information technology, digital archives are a reliable and efficient means of storing materials from culture and the arts, and can help preserve precious cultural resources for academic research and the general public’s appreciation. CityU endeavours to foster among our faculty and students a spirit of exploration in their teaching, research and learning. I believe these precious archives will really benefit CityU and encourage young people interested in visual studies to begin their professional journey here.”
Professor Lee said, “The media industry is undergoing a revolution with the current being a trend from simple text towards a rich mosaic of text and video. The Archives have a dual benefit:  to save precious historical records and to pave the way for the coming of a new media century.”
The Archives cover, among other areas, the differences between Shanghai’s docks and the Huangpu River then and now, and materials for the comparison of the living conditions before, during and after the Anti-Japanese War, along with vivid profiles of eminent figures from modern China, added Professor Lee. 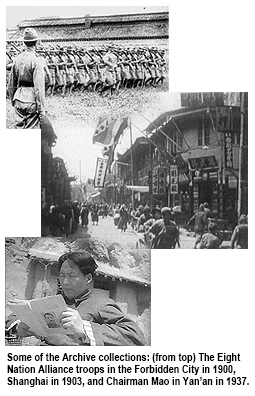 After the ceremony, a two-hour symposium titled “Visual Communication: Catching Life, Inheriting Culture” was held. The four speakers were Dr Zhou Bing, Mr Khan Lee, a renowned Taiwanese film director, Dr He Zhou, Associate Head of COM, and Mr Chang Jiahuang, a well-known artist.
Trailers for Dr Zhou’s South of the Ocean and Mr Lee’s Ataabu were also played during the ceremony. The documentaries will be screened separately on the evenings of 14 and 15 April at CityU’s Run Run Shaw Creative Media Centre.
A historical documentary with deep humanity, South of the Ocean casts new light on the past, present and future of Chinese emigrants’ adventures in Southeast Asia. It explores their stories, past and present, in a global perspective, offering us insight into the development of overseas Chinese communities.
The documentary won the Golden Kapok Award in the Best Documentary Series in the 2013 Guangzhou International Documentary Film Festival, China and was listed in the 4thround of excellent domestically produced documentaries recommended by the State Administration of Press, Publication, Radio, Film and Television of the People’s Republic of China.
Ataabu tells the life of the three generations of the Lin family in Wufeng, Taiwan. The family’s choices under different regimes exemplify Taiwanese immigrants’ struggle to survive and develop.
CityU has appointed Dr Zhou as an Adjunct Professor of COM following his strong support for CityU through the setting up of the visual Archives. He will teach at the University regularly and guide the students to shoot and produce documentaries. Dr Zhou has filmed widely popular documentaries for China Central Television, among them The Palace Museum, The Art of Dun Huang, National Palace Museum of Taipei and When the Louvre Meets the Forbidden City. All of the films received a great deal of praise when released on documentary channels in the US.