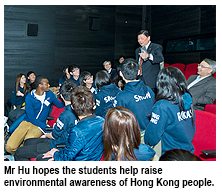 The Council Chairman of City University of Hong Kong (CityU) has expressed his hope that the Antarctica project will encourage people in Hong Kong to be more environmentally aware.
Mr Herman Hu Shao-ming met with the students who participated in the CityU project at a meeting on 24 February. He was accompanied by Professor Horace Ip Ho-shing, Vice-President (Student Affairs), Professor Jeffrey Shaw, Dean of the School of Creative Media (SCM), and Dr Raymond Chan Kwok-hong, Dean of Students. 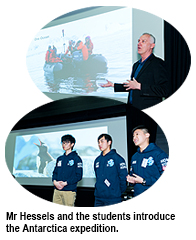 At the meeting, the expedition and the related projects were introduced to the Chairman and the other guests by the expedition students and Mr Scott Hessels, Associate Professor of SCM and the leader of the Antarctica team.
Mr Hu said he appreciated that CityU had put a great deal of effort into organising the trip, adding that he hoped CityU would initiate similar excursions that encouraged students to expand their horizons.
“I am very excited to share your experience,” said Mr Hu, who visited Antarctica five years ago. “During my visit I saw sections of icebergs collapsing, which I am sure you did, too. I am sure that 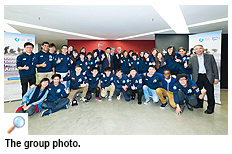 you also had to vacuum yourselves and clean your shoes before going to the shore.”
Mr Hu appealed to the students to invite as many people as possible to the exhibition in May, saying that he hoped that their experiences would help raise public awareness about being more conscious about the environment. 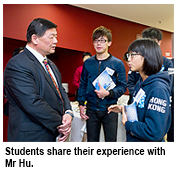 He also gave out copies of Antarctic Impressions, a book that records his and his team members’ visit to the Antarctic Great Wall Station in 2009.
The CityU undergraduates returned to Hong Kong on 3 January after the 21-day expedition. During the trip, they collected environmental data that they will use to create original artworks. An exhibition will be held in May 2014 featuring some of the project outcomes.