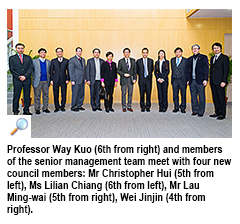 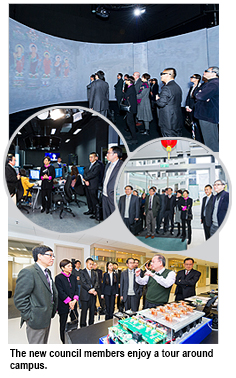 The tour took in the facilities for research on millimeter-wave and terahertz technologies in the State Key Laboratory of Millimeter Waves in Academic 3. The new members also walked around the student hostels, learning about hall life.
Next they visited the state-of-the art facilities at the School of Creative Media and experienced the “Pure Land: Inside the Mogao Grottoes at Dunhuang” exhibition. They also toured the studios in the Department of Media and Communications, such as the 3D-TV Virtual Studio, and the Digital Newsroom, among others.
Ms Chiang said the teaching and learning facilities were well-quipped and advanced, with Mr Hui adding he now had a much clearer idea about CityU’s positioning.
Wei Jinjin said the visit enabled her to understand the progress made by CityU over the past 30 years.